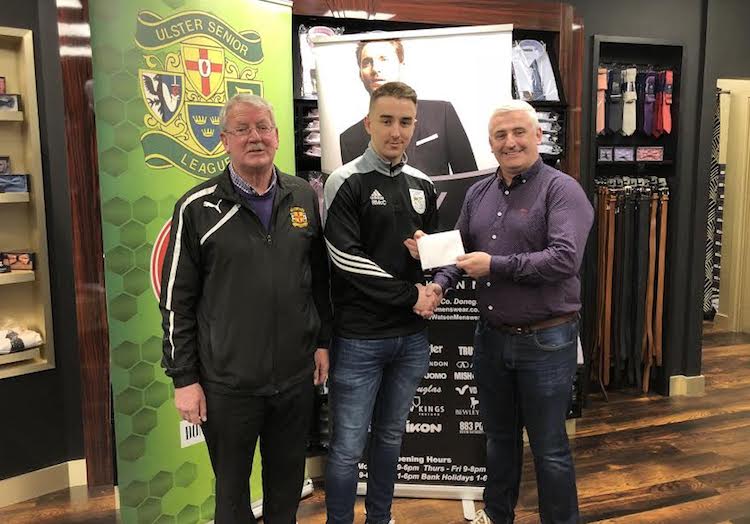 Letterkenny Rovers are challenging on three fronts as the Ulster Senior League enters the business end of its campaign.

Rovers are battling for the Four Lanterns Ulster Senior League and have booked a place in both the Donegal News USL Cup and Knockalla Caravans Senior Cup finals.

Since March, Rovers have kept seven clean sheets – and that defensive solidity has helped keep the Cathedral town side on the trophy trail.

Former Manchester United youth Ryan McConnell has helped shore things up for Eamonn McConigley’s side since his return to his hometown team in January.

McConnell’s stellar displays of late have seen him named as the Watson Menswear Ulster Senior League Player of the Month for the March-April period.

“Clean sheets are what we are after,” says the 22-year-old McConnell.

“it’s nice to challenge at the top. At the last couple of clubs, I’ve been in teams that have just been happy to stay up, so this is different.

“We are out Sunday and Wednesday for the next few weeks. It’s been a successful season so far, so hopefully we can push on now and win the finals.”

These are certainly busy times for Rovers, who moved within seven points of Cockhill, who they still have left to play in the League – as well as those two Cup finals.

McConnell has enjoyed returning to partner Conor Tourish at the heart of the Rovers rearguard.

He says: “I’ve played with Conor before and we’ve a good relationship. Rory Kelly a fantastic keeper and is a great man behind us.

“It’s difficult with Ryan Gildea out injured at the minute, but different players have come in and done well.”

Four of those clean sheets were in the League, while one of them was in the Intermediate Cup semi-final, a 0-0 draw with Firhouse Clover.

But Rovers lost 2-0 in the replay in Tallaght, their dreams of an Aviva Stadium return turning sour.

McConnell says:  “The Aviva was so close. A few of the boys did it before, but mistakes cost us that day. We have to just look forward now to the other Cups.”

McConnell has also managed to get in among the goals. The defender netted one of the goals in Sunday’s 4-0 win over Derry City Reserves in the Donegal News USL Cup semi-final and previous bagged a goal in the 5-0 away win over Swilly Rovers.

McConnell – capped by the Republic of Ireland at Under-19 level – joined Finn Harps in November 2015 after having been released form United that summer. At Old Trafford, McConnell had been captain of the club’s under-21s but, ultimately, injury would see his stint in Manchester cut short.

The Oldtown native found game time limited at Harps and, in July 2016, he made a loan switch to Ballinamallard.

Although he penned a new contract at Harps, he left to make a permanent transfer Ballinamallard last January.

Towards the end of 2017, McConnell suffered from a loss of form and his mood darkened before he parted ways.

“It wasn’t difficult because I wasn’t happy up there,” he says of leaving the Mallards.

“I spoke to Gavin Dykes and told him what I was thinking.

“Coming back from the Irish League has been tough, even adjusting to the pitches. I’m enjoying it and I’ve enjoyed it so far.

“You have to adjust a good bit and it’s hard to get used to the pitches. It took me a game or two, but I’ve got there.”