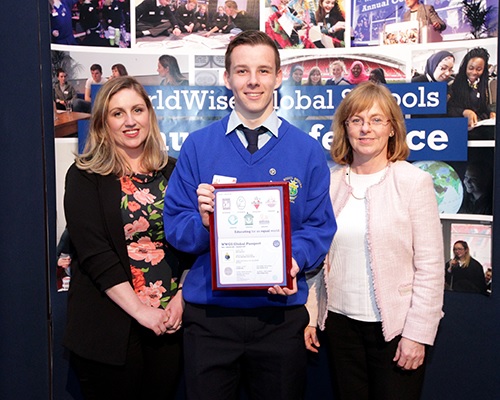 A student and a teacher from Scoil Mhuire Buncrana have been awarded a prestigious national award in recognition of their work in promoting global justice.

Ryan Fitzpatrick and his teacher Sophia Gorney from Scoil Mhuire Buncrana were awarded a ‘WorldWise Global Schools Diplomatic Passport’, in recognition of their extra-curricular work in development education, at an annual schools conference that was held at the Galmont Hotel in Galway at the end of April.

Close to 50 Irish secondary schools received prizes at the event, which was hosted by Worldwise Global Schools (WWGS), the organisation that is charged with delivering Irish Aid’s schools Development Education programme.

WorldWise Global Schools Director, Rita Walsh said: “The school, under Ryan and Sophia’s leadership, is undertaking development education work across every aspect of school life. They have organised a campaign called “Refuse the straw”, amongst other activities, as part of their fight against single use plastic.”

Ryan and Ms Gorney were amongst 300 students and teachers from 70 secondary schools to attend the 5th annual Irish Aid WWGS annual conference, where 50 of the schools were awarded WWGS Global Passports.

The event provided a platform for Irish secondary school students to speak out and take action on critical global issues, and to call for the Irish government to take the issue of sustainability seriously.

The day focused on the UN’s 17 Sustainable Development Goals that provide the framework for reducing poverty and inequality globally by 2030.  Some of the goals focused on climate action, responsible production and consumption and reducing inequalities

“Development Education provides schools with the opportunity to really explore global issues and to identify appropriate action they can take in response to inequality and injustice. All of the students and teachers who are at the conference today have demonstrated their commitment to making the world more just and sustainable – which is inspiring for us all,” concluded Rita Walsh.