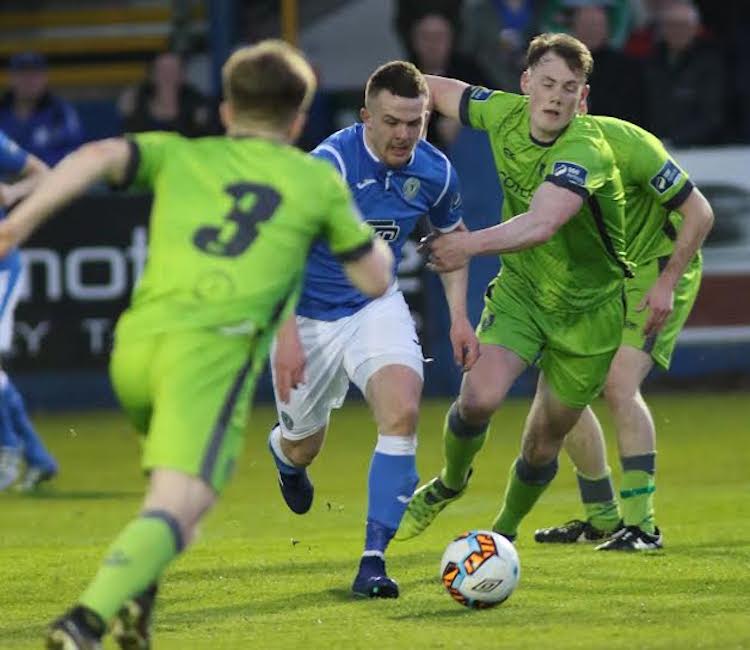 written by Chris McNulty May 4, 2018
Facebook0Tweet0LinkedIn0Print0

Finn Harps came from behind to earn a third League win on the spin as Ollie Horgan’s men put Drogheda United to the sword.

Second-galf goals by Keith Cowan and Ciaran O’Connor gave Harps a hard-earned win – their first on home soil against Drogheda in 20 years. Not since a deflected Stuart Gault goal on Valentine’s Day in 1998 had Harps beaten Drogheda in Ballybofey.

They had to do it the hard way here in front of 631 spectators and they were indebted to a 30-minute cameo of the genial Paddy McCourt.

McCourt – in as a half-time substitute for Harps – floated a dangerous free-kick into penalty area and Cowan climbed high to power a header past Paul Skinner.

Harps hit the front in the 64th minute with McCourt again at the controls. McCourt combined with fellow-sub Devers and the ball fell invitingly for O’Connor, whose deadly finish put Harps ahead.

Moments earlier, O’Connor drilled over the top after showing a good turn of pace to get past Conor Kane.

Until the break, it hadn’t looked good for Harps. 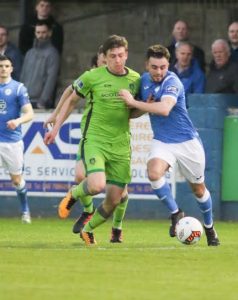 After Sam Todd – who had struck late winners for Harps in each of the last two games against Cabinteely and Longford – fouled Chris Lyons out on the left-hand, Brennan struck gold.

Brennan’s effort flew beyond Ciaran Gallagher and nestled in the far corner of the Town End net.

Harps had an early let off when Lee Duffy’s sixth-minute shot deflected up and onto the top of the crossbar.

Gallagher – who had been a big doubt pre-match after shipping a heavy knock in Saturday’s 2-1 win at Longford – held onto a shot by Lyons and, on the half, hour the Raphoe man had to be at his best to prevent the visitors from doubling the lead.

Duffy asked the questions from the edge of the area, but Gallagher reached well to divert over the top.

Mark Timlin and Ciaran O’Connor returned to the starting XI and they combined early on with O’Connor beating the offside trap. O’Connor got on the end of Timlin’s pass, but Drogheda net minder Skinner was out to save.

Late in the half, Timlin fired a tame free into the arms of Skinner.

Harps sent on McCourt and Jesse Devers at the interval in a bid to spice up their attack. And it was McCourt who was the provider for Cowan’s leveller and a 20-minute cameo by the ex-Celtic ace turned this one in Harps’ favour. 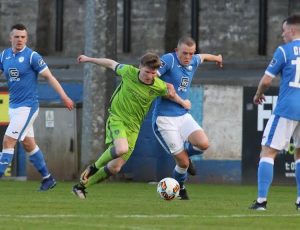 Michael O’Connor in action for Harps against Drogheda

O’Connor nosed Harps in front, but Drogheda spurned a big chance of equaliser late in the night when Lyons rolled wide after getting his shot away from 18 yards out.

By then McCourt had limped out of action, but Harps – in spit of six added minutes – managed to hold onto their lot.