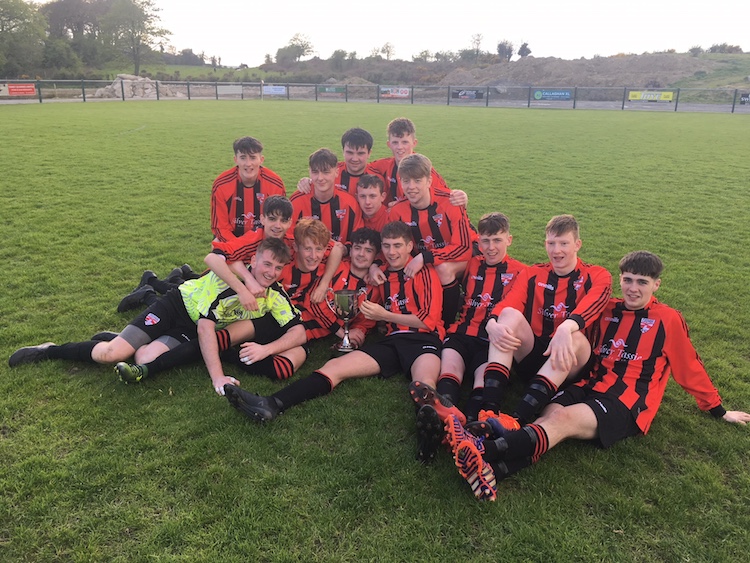 Just when they were readying themselves for penalties, Keelin McGroddy struck a dramatic winner in the dying embers of extra time to clinch the Colin Breslin Cup for Fanad United.

By Charlie Collins at The Moss

The Donegal Youth League champions secured the prize in the most memorable of ways as, right in the last minute of extra time, McGroddy scored a thrilling match-winner.

A flick on by Darragh Greene sent McGroddy on his way and, after a solo run, he turned and beautifully curled home into the far corner.

Letterkenny Rovers had forced a series of set pieces in the first half of the extra period, but couldn’t trouble the peninsula men, who took the prize.

It was Rovers who began well in normal time with Brandon Manues forcing a save from Matthew Gallagher after just ten minutes.

Fanad, though, went close themselves when Padraig McGinty’s cross found Darren McElwaine, but he pulled his shot off target.

Neil Doherty’s side then broke following a Rovers corner, but stout defending by Darren Ferry kept them at bay as he denied McGroddy.

Conor McHugh, on the stroke of half-time, forced Letterkenny ‘keeper Aaron Hepburn into a super save from a cracking free kick.

McGroddy couldn’t get enough power on a header early in the second half, while Rovers had a huge chance on the hour.

Conor O’Donnell managed to get a flick onto a corner, but Shaun Kerr cleared from the goal-line.

O’Donnell’s set plays caused no end of problems late on. DJ Kelly teed up Manues from one, but Jordan was equal to it.

Then, Clinton Ilupeju riffled into the side netting while Gavin McGee’s header wasn’t far off in the final minute.

It hadn’t seemed as if extra time was going to throw up a winner – but McGroddy had other ideas.