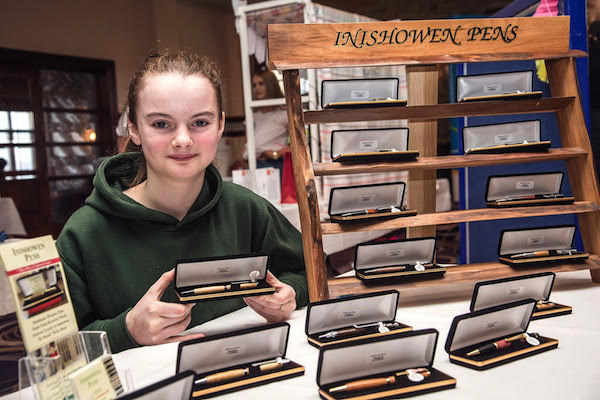 A young student from Scoil Mhuire in Buncrana wowed the judges at the national Student Enterprise finals in Dublin, taking second place in the intermediate category.

Molly Boyd uses a range of recyclable materials found in Inishowen to make her range of Inishowen pens and her presentation and business skills shone through on Wednesday last when she beat off stiff competition to bring home a prize for the Inishowen school.

The bright young entrepreneur meticulously crafts her range of high-quality wooden pens and has been quick to find markets for her product.

She was pipped to the national title in the Intermediate category by a team of students from CBS Kilkenny. Edward Daly, John O’Brien and Matthew O’Sullivan who came up with Lift Arm Assist, a hydraulic arm to replace the lift arm stabiliser on the back of a tractor.

Local Enterprise Office, Donegal, was also represented in the senior category by enterprising young students from Loreto in Letterkenny, who have invented a board game called ‘Hotspots,’ aimed at highlighting and celebrating the beauty of Donegal.

Earlier this year Aifric Ni Fhearraigh, Alanna Sweeney, Emma Howard and Jade McCollum had impressed the judges at the Donegal finals where they scooped the overall winners’ prize.

Both Donegal representatives came in for praise this week from Head of Enterprise in the county, Michael Tunney.

“The Local Enterprise Office is geared towards promoting the spirit of entrepreneurship in Donegal and we were delighted, not just with our fantastic teams representing us on the national stage this week, but also with the standard of entries we received at our own county competition this year. 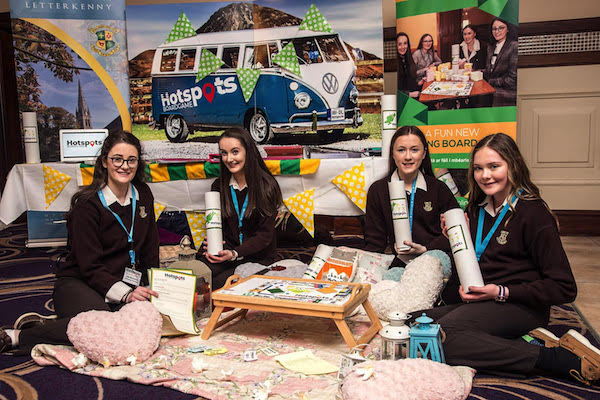 Aifric Ni Fhearraigh, Alanna Sweeney, Emma Howard and Jade McCollum from Loreto, Letterkenny who represented Donegal at the National Student Enterprise finals in Croke Park last week with their board game Hotspots aimed at highlighting and celebrating the beauty of Donegal.

“It is tremendous to see the enthusiasm and dedication the participating teams demonstrated and I’d like to congratulate both our national finalists – their teachers Martina McBride at Scoil Mhuire and Mairead Boyle at Loreto – and to add a special word of praise for Molly for her fantastic achievement in taking a runners-up prize,” he said.

Last week’s Student Enterprise Programme National Finals in Croke Park saw almost 80 student enterprises run by 230 teenagers competing for honours after being selected from among the 23,600 participants at 480 second-level schools around the country.

Speaking at the finals in Dublin last week Trade, Employment and Business Minister Pat Breen said this and similar initiatives are key to developing the country’s future enterprising culture.

Molly writes her way to history as pen business scoops national prize was last modified: May 10th, 2018 by Stephen Maguire