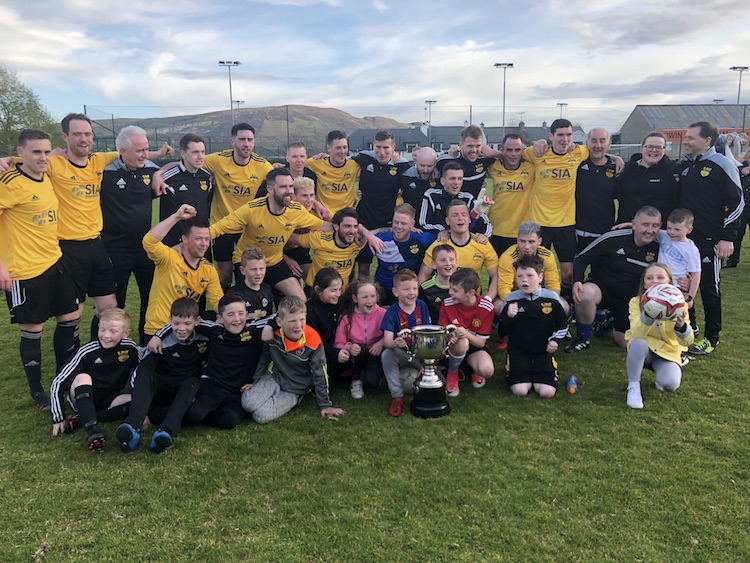 Glengad moved into familiar territory as Terence Doherty’s brace helped shoot the four-in-a-row chasers to a comfortable win over Greencastle at The Crua.

By Chris McNulty at The Crua

Doherty’s double, in between a clinical Stephen McLaughlin goal right after half-time, takes Shane Byrne’s men to within a point of retention – ahead of a winner takes all clash with Aileach at the Lakeside next weekend.

Aileach had a coast for a 6-1 home win over Culdaff this afternoon. Ronan Coyle’s double and goals from Anthony Doherty and Gavin Doherty had Aileach four-nil in front by the break. Coyle completed his hat-trick and Paddy Curran added another to keep their hopes alive.

Glengad, though, remain with their noses in front and Aileach now how they must defeat Glengad to take the title race to a play-off.

Glengad, even without Paddy McDermott, Christy McLaughlin and Michael Byrne, managed to navigate this one with little fuss.

It took Glengad only until the 12th minute to get in front. Shane Canning and Cathal McDaid combined with ex-Harps man McDaid’s ball inside swept home by the deadly Doherty.

The in-form Glengad striker could have doubled the advantage just three minutes later, but he riffled over the top after Stephen McLaughlin’s cross deflected into his path.

Glengad threatened even before Doherty’s breakthrough and the hosts were well in command, but unable to add to the lead in the opening period.

McDaid and Seamus Doherty linked superbly to create a chance for Jason Doherty, but the full-back fired wide.

Glengad were inches from netting again midway through the half when Doherty beat the offside trap to latch onto McLaughlin’s delicious pass. Doherty centred for McLaughlin, who had raced through to get back onto the end of the move but, after beating Dillon Doherty, his shot careered back off the post.

After Doherty denied John Gerard McLaughlin, Adam Byrne might have struck gold, but he shot at the Greencastle ‘keeper when he’d had the chance for a lobbed finish.

The longer it remained at 1-0, the more dangerous it could have got for Glengad with a teasing Shaun Doherty free, that flew over the top, serving as a reminder.

90 seconds after the re-start, Glengad struck again as McLaughlin tucked between the legs of ‘keeper Doherty after good work on the left by McDaid.

McLaughlin unselfishly turned provider for Doherty on 77 minutes and Doherty was agonisingly close to a hat-trick as he clipped wide in stoppage time after surging clear.

Ten minutes from the end, former Glengad player Nigel McMonagle blasted home from a penalty, but it was, bar a tester by Stephen Grant in the second half, a stress-free afternoon for Kevin McLaughlin, the Glengad ‘keeper.