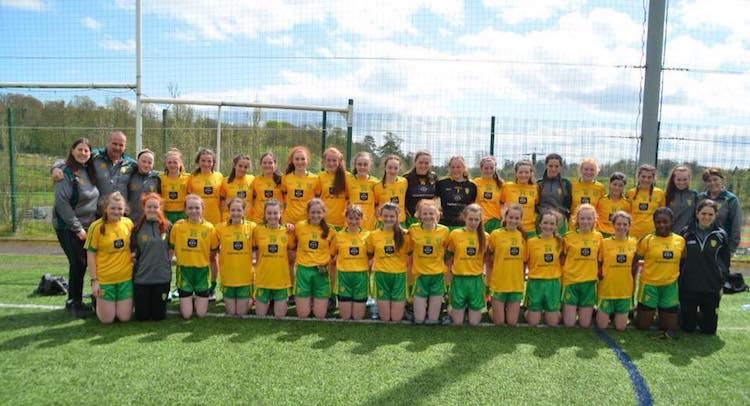 Donegal’s Under-14 girls advanced to the Ulster C final after a super win over Fermanagh in irvinestown yesterday.

After winning the toss captain for the day Katherine McLaughlin elected to play with the strong breeze and this proved to be the right decision as the Donegal forwards were rampant in the opening half.

Jodie McFadden (Termon) hit a personal tally of 3-3 and with Niamh Browne (Naomh Conaill) 1-4 and Rebecca McColgan (Robert Emmets) 1-2 this set Donegal up for a comfortable win.

Donegal had 11 different scorers on the day super sub Jamielee McMahon (Glenfin) hit 1-2 after coming off the bench.

The goal of the day came after 25 minutes with the hosts on the attack after just getting a goal.

Shannon Leech (Moville) dispossessed the Fermanagh forward before releasing the ball to Aoibhinn McGarrigle (Aodh Ruadh) who took off on a solo before rifling the ball to the roof of the net.

Caoimhe Hughes O’Brien was pulling the strings in midfield and her new playing partner Lucia Doherty (Carn) weighed in with two great points.

Shannon Leech and Lucy McGlynn (Aodh Ruadh) hit a point a piece from half back.

It was all hands to the pumps at the start of the second half when Fermanagh got the wind in their backs but Aine Hill (Aodh Ruadh) stood firm between the posts.

Captain Katherine McLaughlin (Moville) and Clodagh Sheerin (Naomh Colmcille) held the half back line leaving Lucy McGlynn to push up on the Fermanagh sweeper.

All the subs performed superbly when they got their opportunity and have really given the management a selection headache ahead of the final.

Donegal lost our link player Brenda Carr (Glenfin) to a dislocated finger in the warm up so we would like to wish Brenda a speedy recovery.

Meanwhile, the Donegal Under-15s made it four-from-four as they had a brilliant victory over Monaghan in O’Donnell Park. They now face Armagh next weekend. 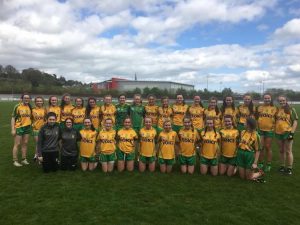 Donegal U14s advance to Ulster final after big win in Fermanagh was last modified: May 6th, 2018 by Chris McNulty