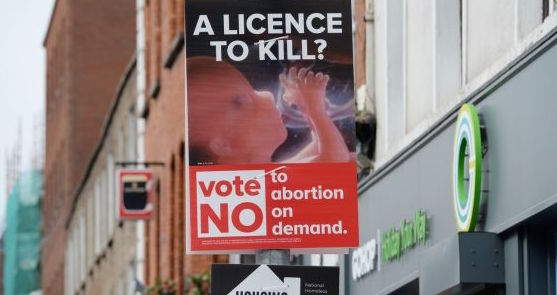 Call to regulate shock posters in Donegal ahead of referendum

Independent TD for Donegal Thomas Pringle has called on the Taoiseach to regulate the shock tactic posters ahead of the referendum on the 8th amendment.

Deputy Pringle brought up the issue during Leaders’ Questions in the Dáil today after Google announced a total ban on ads related to the 8th amendment.

“It’s time for the Government to act now that the private sector has responded to calls for greater regulation of advertising during political campaigns. While Facebook only bans foreign ads, Google has gone one step closer to ban all ads pertaining to the referendum. What has the Government done to date? Nothing.

“I’ve been canvassing with Together for Yes in Donegal and I’ve seen these types of shock posters have been popping up outside schools, churches.

“I have spoken to parents who have had to explain to their children what they are seeing outside their school. This is unacceptable. Across the country posters are clustered around maternity hospitals which is disrespectful to women and families.

“Campaign posters and online advertising have exploited fearmongering using fake statistics, myths and emotive untruths as a way to coerce the voting public.”

He added that if Google and Facebook recognise how this is damaging the integrity of referendums and political processes, then politicians have a duty to acknowledge that and act on it too.

“Funding of political advertising needs greater transparency as well however, I fear it will be too late for this referendum. It will be important that regulation is updated for any future campaigns like the General Election.

“Varadkar unfortunately stuck to his usual spiel saying the Government fears that regulating posters would lead to regulation of literature eventually leading to a curbing of the right to speech. I disagree as do so many people ahead of the vote in the upcoming referendum.”

Call to regulate shock posters in Donegal ahead of referendum was last modified: May 11th, 2018 by Stephen Maguire
Tags:
donegalpostersreferendumThomas Pringle