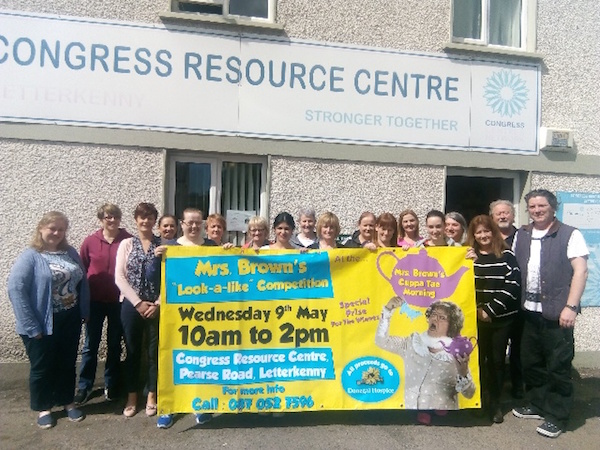 Do you fancy yourself as a feckin’ Mrs Brown lookalike?

It’s all round to the Congress Resource Centre in Letterkenny today for a unique fund-raising effort on behalf of the Donegal Hospice.

The brainchild of Catriona Rodgers from Dungloe, the ‘Mrs Brown’s Look-A-Like competition’ promises to provide a few hours of fun and games. And the entertainment value will soar with music and madness the order of the day.

Catriona’s mother, Mary, had been diagnosed with leukaemia in April last year and spent time in the Oncology department at Letterkenny University Hospital and at St Luke’s Hospital in Dublin.

“She didn’t give up the fight to live – she was stubborn like that. A real trooper to the end,” says Catriona.

And the end came in the Donegal Hospice in November. “It was such a calm and peaceful environment and the staff there were so good and so compassionate.

“And I always thought I wanted to do something for them and help support the Hospice.”

It was a belief, in truth, she had held since her uncle, Paddy McGee, had passed away in the care of the Hospice in 2002.

“So when mum passed last year, I said I would definitely do something this time.”

To date that has included organising an Easter hamper draw and a book sale at the Resource Centre. There was also a recent quiz night at the Arena 7.

Mrs Brown’s Look-a-Like competition should add considerably to the fund-raising effort. Members of the public are invited to come along to the Centre on the day dressed in the regalia of one of the popular television comedy’s characters and there’ll be an adjudication to decide the best of the Brownies!

Not the only entertainment lined up – the likes of Fergus Cleary and Freddie McGettigan will be along to provide some fun and music in conjunction with other local entertainers.

A specially erected marquee will add to the occasion and there’ll be tea, coffee and refreshments on offer.

The fund-raising effort will include a bucket collection on Letterkenny Main Street to help swell the takings on the day. There’ll also be a selection of spot prizes and a raffle while the organisers are in addition looking for books and bric-a-brac to sell during the event.

Acknowledges Catriona: “I want to thank all who are helping to organise the event and Centre coordinator, Marie Slevin, for her great support.

“And I also want to thank the Donegal Hospice for looking after my mum. They take care of all of the family unit and not just the patients and do an incredible job.”

Adds Marie: “It was Catriona’s idea from the start and she has done great work in organising this fund-raiser and we hope for the support of the community to help make the day.

“We’re specifically looking for men to come along dressed up as Mrs Brown! Don’t be shy and just ask yourself, how far will you go for the Donegal Hospice?.”

Hopefully as far as the Congress Resource Centre on Wednesday 9th May for the look-a-like competition and cuppa tae morning.

Do you fancy yourself as a feckin’ Mrs Brown lookalike? was last modified: May 9th, 2018 by Stephen Maguire
Tags:
Congress Resource CentredonegalfundraiserletterkennyMrs Brown