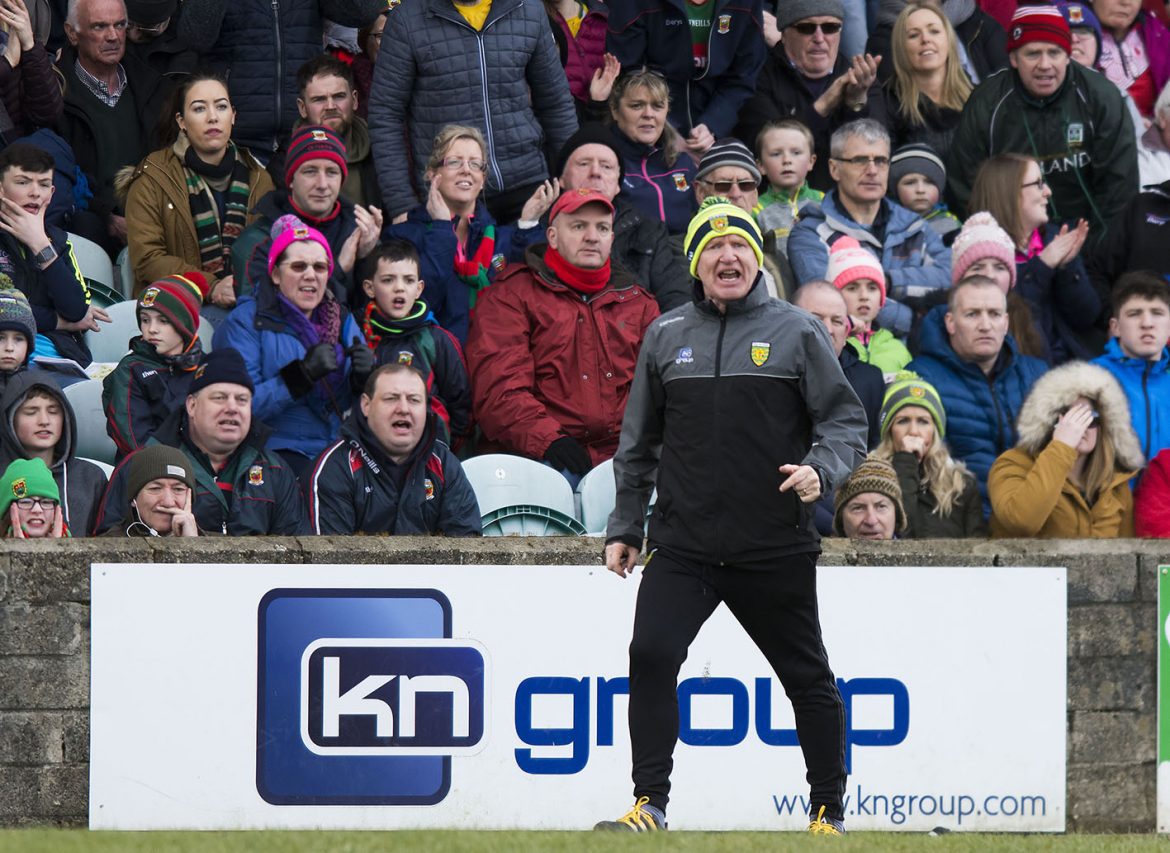 The Donegal players looking to make their championship debut

written by Stephen Maguire May 11, 2018
Facebook0Tweet0LinkedIn0Print0

Declan Bonner could hand out a number of Ulster championship debuts this Sunday.

The Na Rossa man has remained very tight-lipped in talking about his team selection and has yet to give anything away.

The squad is expected to be announced on Sunday but Bonner himself admitted on Tuesday at the press day that he knows in his head who will make the starting XV.

Shaun Patton spent most of the national league campaign between the posts for Donegal. The St Eunans man has a soccer background and has featured for Sligo Rovers and Derry City in the past.

This will be Patton’s first season in Donegal colours after he was called into the panel at the start of the year. Patton will have competition for his spot as Mark Anthony McGinley has been confirmed by Bonner as fit to play on Sunday.

The St Michaels man is yet to feature for his club this year and that could sway in favour of Patton to give him his championship debut.

Niall O’Donnell a club teammate of Patton’s has also been put in contention for a start on Sunday. The teenage forward has been one of the most talked about talents in Donegal football for years now and he too will be hoping for a championship debut.

O’Donnell has had massive success in the championship despite only still being nineteen years old. The St Eunans man has Ulster minor and U-21 medals to his name and will now be looking to add to that at senior level.

Nathan Mullins is another in line for a debut, he has taken a slightly different route to the Donegal side in comparison to the others. The twenty-seven year old plays his club football with St Vincent’s in Dublin. He took the call from Declan Bonner to join the county setup at the start of the year.

“I’m honoured to wear the Donegal jersey and I’m looking forward to the rest of the year,” Mullins told Donegal Sporthub back in January.

The midfielder has performed impressively since and similarly to the rest, he too will be looking to make his championship bow.

Caolan McGonagle and Tony McClenaghan are graduates from Bonner’s Ulster winning minor team from 2014 and are well used to success. Both are strong, tall figures hailing from Inishowen, and they have gotten solid playing minutes over the course of the league campaign. They will be hoping to have proved enough of themselves to earn minutes on Sunday.

Stephen McMenamin was also a member from Bonner’s minor squad in 2014. The Red Hughs man played on the squad the following year again and was joined on that team by Daire O’Baoill. Both McMenamin and O’Baoill were part of the Ulster winning U-21 team from last year but have yet to feature at senior level.

Another St Eunans man who could well be in with a chance of getting his first championship minutes at senior level is Conor Morrison. The corner-back has featured at every level for under-age teams and will be hoping to add to his impressive CV by getting on the field this Sunday.

There’s no certainty that any of these players will get their debuts at championship level but it is likely that a few will grace MacCumhaill park this Sunday.