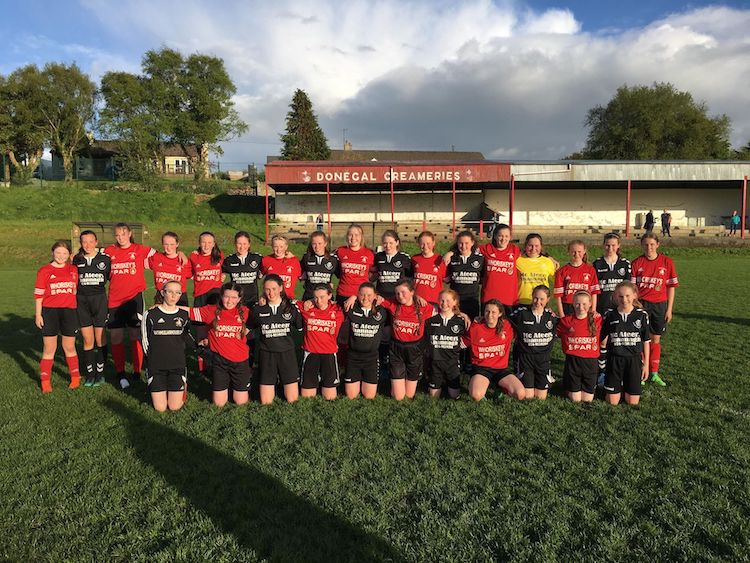 The battle for honours at all levels in the Donegal Women’s League is getting intense. Mulroy and Illistrin lead the way in the U12 League, Mulroy are at the summit of the U14 League and Kilmacrennan Celtic have a slender advantage in the U16 League.

Conditions were excellent on Wednesday for this local derby match and the pitch was in great condition.

Don’t be fooled by the scoreline that this was a boring 0-0 draw.

From the first minute to the last this game embed and flowed.

Kilmacrennan dominated the opening exchanges with the aid of a strong breeze. Their direct approach was causing bother for the Illistrin defence with Ciara McGarvey in particular trying her luck from distance.

On one occasion Orla Corry in the IIlistrin goal did well to parry her shot and Aoife Kelly was on hand to finish but was offside.

Illistrin were dangerous on the break with Jodie McFadden threatening on a number of occasions.

A few long balls into the heart of the Illistrin defence was testing for the defence with Aoife Kelly and Helena McGee dangerous in particular.

In the second half the home team took control of the game and played some great football that almost resulted in them breaking the deadlock.

Ciara Doherty was played through by Rebekah McGlinchey on the left side but her well struck effort went wide. McGlinchey went close soon after when Meghan Walden won a challenge in midfield and sent Doherty down the left wing and her great cross was well met by McGlinchey but went inches wide.

Aoibhe Gallagher, Gemma McFadden, and Amy McLaughlin were showing their qualities in defence for Kilmacrennan.

On the counter Kilmacrennan were always dangerous. One great run from Ciara McGarvey ended with a fine shot that just went wide.

Young Erika Gallagher was having a great game at right back and put in some great challenges. Meghan Walden, Zoe McFadden, Alisha Tobin and Megan McDaid were defending very well too.

Aibhe McDaid made a couple of excellent challenges just as Ciara McGarvey threatened late on  and she was well supported by Orla Corry, the Illistrin keeper.

Aislinn Coll showed some great touches in the midfield area and set up some great attacks for Illistrin with Kilmacrennan’s Ciara McElwaine in close attendance.

An exciting game to say the least but both teams had to settle for a share of the spoils.

The game started strong with both teams putting in great work rate.

Caitlin Heraghty and Iseult Ni Mhathuna was having a brilliant game for Mulroy with Iseult causing all sorts of danger in attack.

Mulroy played very well together on the night and played their hearts out to earn a well deserved victory with the U14 girls showing brilliant performances on the night.

Caoimhne Heron worked very well for Mulroy along with Eimear, Dearbhla, Lauren, Lisa and Maria Doherty. Lagan had a good performance on the night and put in good work rate. Scorers on the night for Mulroy where Iseult, Caoimhne and Lauren McBride

This played in a chilly blustery evening at the Finn Valley Centre.

After a scrappy period Raphoe  had their first chance and Shania McMonagle effort skimmed off the crossbar.

Moments later McMonagle put the visitors ahead after outpacing Emma Neeson from a long pass to put beyond the Valley keeper.

After a spell of transition by both teams Valleys Hanna Gallagher was unlucky not to level the score after combining with Ellie White.

Soon after, the pacy McMonagle was to get her second of the game after converting from a replica of her opening goal.

From the restart of play Valley enjoyed a dominant spell and were deemed unfortunate to go in at the break trailing  2-0.

Raphoe restarted and soon found themselves under the cosh as Valley came more into the game and Catherine Elliott’s interception found Sinead Harkin whose long pass played to Aime Lafferty played in the hard working CJ Doherty whose clinical finish went beyond the hapless Raphoe keeper.

Encouraging signs were evident to see as Valley continued to create chances and were unlucky not to convert.

Valley’s dominance was soon undone as Raphoe extended their lead against the run of play after Cody Walsh used her trickery skills to break away and extend Raphoe’s lead against her former club.

Valley to their credit continued to push at the stubborn Raphoe defence but were unable to reduce the deficit.

Mulroy started strong against swilly, scoring their first goal straight from a corner kick by Maire Kerr at 11 minutes.

Swilly came more into the game, creating chances but not finding the net.

Some great play by both teams with Anna McFadden and Emily Irwin outstanding in the Swilly defence.

With minutes to go until half time, Mulroy scored their second.

Just two minutes into the second half, swilly were caught out with a quick goal from Aoife Gibbons. The game was very evenly matched after that with heather Mc Laughlin and Iseult ni Mhathuna battling it out in the midfield.

Best for Mulroy were Aoife Gibbons and Iseult ni Mhathuna.

Best for Swilly were Heather Mc Laughlin and Mae McCarron

A young and inexperienced Gweedore Celtic team were no match for a Raphoe side hitting good form this season and the home team ran out convincing winners.

Rebecca McColgan set them on their way and the goals flowed in the first half, Abigail Asokuh-Temple and Cody Walsh each grabbing two, Ella McHugh adding another and Rebecca McColgan also netting as Raphoe went in well ahead at the break.

Gweedore battled bravely in the second half and pushed Raphoe back but they were unable to trouble Abbey Lee Bell in the Raphoe goal and Cody Walsh and Abigail Asokuh Temple both completed their hat-trick while Ella McHugh also netted her second of the game in the second half.

Donegal Women’s League – roundup of latest action from U16 and U14 Leagues was last modified: May 12th, 2018 by Chris McNulty