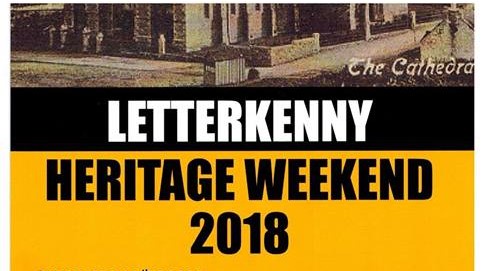 written by Rachel McLaughlin May 12, 2018
Facebook0Tweet0LinkedIn0Print0

Three days of special events are in store for Letterkenny next week as the Community Heritage Group pays tribute to a well-known local figure and hosts a series of educational talks and tours.

The Letterkenny Community Heritage Group will pay tribute to the late Eunan ‘Busty Blake’ at an event on the 18th May. Eunan Blake, who died last year, was one of the greatest sporting talents ever to come out of Donegal and but for his deep attachment to his hometown he would almost certainly have played for one of the many English and Scottish clubs that were keen to sign him.

As it was he had an illustrious career playing for Sligo Rovers, Derry City and Finn Harps over a 19-year period from 1955 until 1974. Following that he went into management becoming the assistant manager of Athlone Town and then in 1977 the manager of his former club, Finn Harps.

The event will take place in the Station House Hotel in Letterkenny at 7.30pm on Friday the 18th May and amongst those taking part will be former Derry City Player, Eddie Mahon, former Finn Harps, player Jim Sheridan and the former captain of Manchester City, Johnny ‘Jobby’ Crossan.

The Letterkenny Community Heritage Group hope as many people as possible will attend this tribute to one of Letterkenny’s finest sporting sons. Music will be provided by Barney McDaid and refreshments will be served. This event forms part of the 2018 Letterkenny Heritage Weekend, which will also include a talk on the 1918 strike at St Conal’s Hospital and an evening remembering Letterkenny and its railways.

DISCORD IN THE ASYLUM

Two years ago, as part of the 2016 Letterkenny Heritage Weekend, Mr. Devlin gave a fascinating lecture on the overall history of the building and the people who lived and worked in it. This year he returns to explore the 1918 strike. He said, “it is appropriate to mark the centenary of this strike for it was groundbreaking in its own way.” In his lecture he will explore the events leading up to the strike, the effect it had on the employees and their employers plus the impact it had upon the patients before accessing the legacy of the strike.

The lecture will take place on Saturday the 19th May at 8pm in Dillon’s Hotel, Letterkenny.

REMEMBERING THE RAILWAYS IN LETTERKENNY
The Station House Hotel in Letterkenny will be the very appropriate venue for an evening of railway nostalgia on Sunday the 20th May at 8pm as the Letterkenny Community Heritage Group concludes its heritage weekend with a discussion on Letterkenny as an old railway town.

This event will be the last part of the Letterkenny Heritage Weekend which also includes a tribute to Eunan ‘Busty’ Blake on Friday 18th May (Station Hose Hotel, 7.30pm), a short tour of Letterkenny on the afternoon of Saturday the 19th May (Conwal Parish Church, 2pm) and a lecture that evening on the St. Conal’s Hospital strike of 1918 (Dillon’s Hotel, 8pm).

All events are free and light refreshments will be available at the evening events. 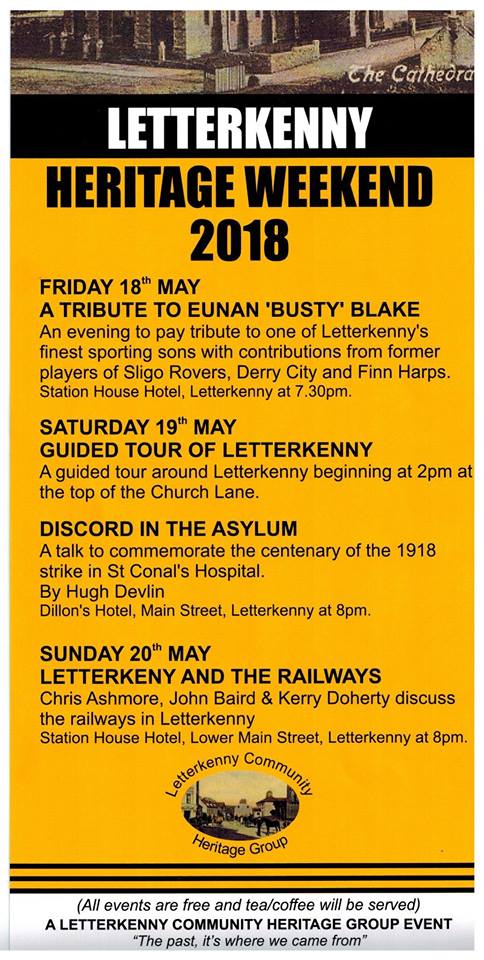