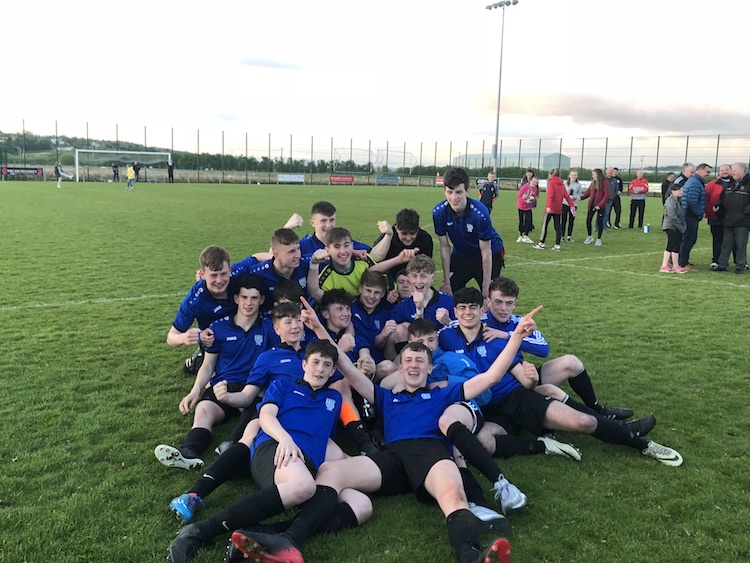 written by Chris McNulty May 12, 2018
Facebook0Tweet0LinkedIn0Print0

Ordinarily, victory in the John Gorey Curran Cup final would be seen as the catalyst for a club’s next step – but Dunfanaghy Youths are battling to save the club’s very existence.

For over 25 years, the club has played on the pitch at Kill, Dunfanaghy, but earlier this year the landlord served them with a ‘notice to quit’.

This summer, they have to vacate their tenancy of the ground they have called home since the 1990s – and currently have nowhere to turn.

Danny Ferry, the Dunfanaghy Youths manager, surveyed the jubilant scenes and reflected on what might be for the club.

“We have a notice to quit and the future of the whole club is in the balance,” Ferry said.

“We have no pitch at the minute for next season. The committee are working very hard behind the scenes to resolve the issue and please God they will.”

Dunfanaghy Youths have 22 players in their Donegal Youth League squad and a further 102 with their schoolboys teams, who play in the Donegal Schoolboys League.

The uncertain future has dampened a historic win last night – Dunfanaghy claiming the prize in their first season in the Youth League.

“Ideally, we’d like to stay where we are,” Ferry said.

“I don’t think that’s an option so it looks like we’re looking for a new home. We’ve been there for a long number of years, over 20 years, and now we don’t know where we’re going.”

The group who toasted silverware last night will soon be overage for the Youth League. Ferry and co are keen to retain their services and even spoke of the possibility of going into the Donegal Junior League should they find a home.

Ferry said: “We know it’ll take a lot of hard work to keep improving. It would be great if maybe we could be going into the Saturday League.

“It would be a shame if we broke up completely. After all that work, it would be nice if they could stay together. It would be great to continue the tradition in the town.”

McCarry’s goal was in keeping with a gripping Cup tie that seemed destined to go the whole way last night.

The Dunfanaghy forward delicately lobbed over Jamie Blaney to net the only goal of the game.

Ferry said: “It’s unreal to win something in our first season. These boys have been with the club since a young age and it’s great for them.

“They’ve come through the ranks and worked their way up. We have a small nucleus of players who all know each other.

“It’s nice to get the rewards. The Youth League has been great as a platform for these boys to express themselves.

“It was an achievement to get here when we’ve only joined the League. We didn’t know what we were coming into, but we wanted to test ourselves.

“The boys have kept coming out and the heads haven’t dropped when results didn’t go our way.”