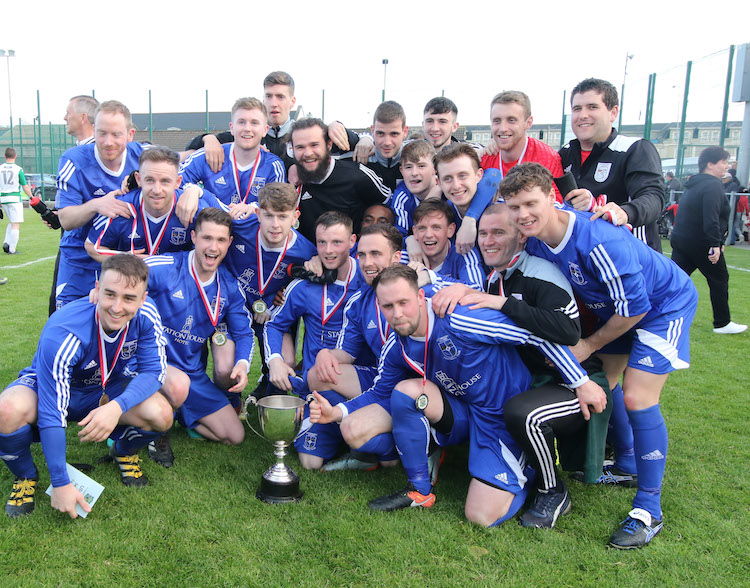 Letterkenny Rovers came from behind to retain their Knockalla Caravans Senior Cup crown.

Declan Sharkey and Ryan Lonergan hit the goals for Rovers after Oisin McColgan opened the scoring for Cockhill.

All the goals came in a 15-minute spell in the first half and it’s Eamonn McConigley’s side who are toasting the glory this evening.

These sides have also to meet in the Donegal News USL Cup final and are vying for League honours, too, but it’s first blood to Letterkenny after they saw off ten-man Cockhill, who had former FAI Intermediate Player of the Year Malachy McDermott sent off 13 minutes from the end.

Rovers were without the suspended Conor Tourish, sent off in their semi-final win over Glengad United, and came into this on the back of Wednesday’s 2-2 draw, which put a big dent in their Ulster Senior League title hopes.

It was Cockhill who took the early initiative when, in the 11th minute, McColgan headed home from Gerry Gill’s corner.

But Rovers were level within three minutes as Sharkey steered in from close range after Lee McCarron could only parry Kevin McGrath’s attempt.

The Cathedral Town side hit the front on 26 minutes. Cillian Morrison and Luke Nelis combined on the left edge of the penalty area.

Nelis’ low, angled delivery found Lonergan, who did well to finish from an acute angle.

In between times, Christy Connaghan tried his luck, but an ambitious effort from 30 yards was always rising.

Cockhill were struggling to gain a foothold in the middle of the park and Cillian Morrison, the former UCD, Derry City and Cork City attacker, signed recently by Letterkenny, curled a delightful effort just over the top late in the half.

Ten minutes into the second half, Mark Moran riffled wide as Cockhill sought a way back into the tie.

Cockhill’s task got even stiffer when they were reduced to ten men in the 77th minute. McDermott was given his marching orders for his part in a clash with Luke Nelis, leaving the Cockhill contingent fuming.

Cockhill attempted to salvage something from the tie, but Toland shot wide from a good position and Rovers – with Ryan McConnell superb from start to finish – held onto their title.