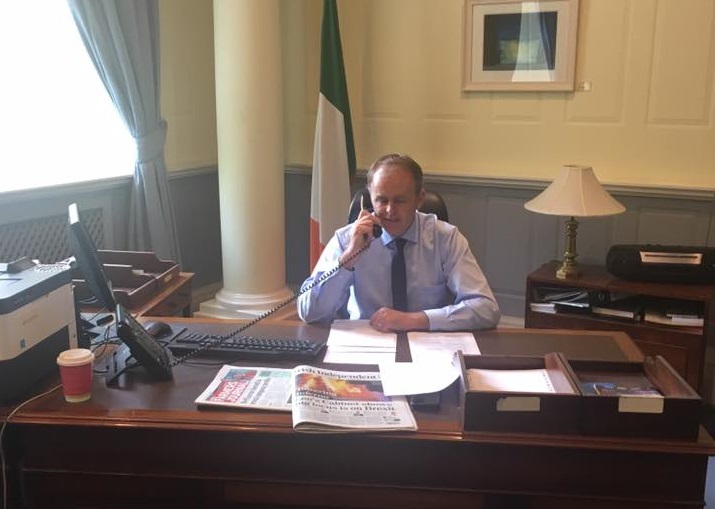 The Government Chief Whip wrote this week to four cabinet colleagues amid concerns that small and medium-sized contractors find themselves unable to bid for some future Public Private Partnership (PPP) schemes.

Mr McHugh, Minister for the Irish language, Gaeltacht and the Islands, raised the issue with Minister for Finance and Public Expenditure and Reform Paschal Donohoe, Minister for Business, Enterprise and Innovation Heather Humphreys, Minister for Education Richard Bruton and Minister for Health Simon Harris.

Mr McHugh said: “Donegal is to see a series of major construction projects in the coming years, among them will be the multi-million euro expansion of LYIT and a planned Community Nursing Unit in Letterkenny.

“These projects, which have been bundled into large-scale Public Private Partnership (PPP) schemes, still have the potential to provide valuable employment for local businesses and add a much-needed boost to the growing local economy.

“Amid the uncertainty around Brexit, I am encouraging ministerial colleagues to adopt a system for PPPs that will create a level playing field for well-established, trusted and experienced firms to compete for these big-ticket contracts.

“I have spoken to local contractors in Donegal about this issue and I will continue to raise it across Government at Cabinet level.”

Mr McHugh added: “In light of recent issues surrounding some large-scale PPPs and the inherent risk that is created for local sub-contractors I am seeking publication of post-project reviews of PPPs.”

Under Public Private Partnership initiatives, the Department of Education has announced a tender valued at €200million for construction projects in 11 third level colleges.

LYIT is one of these with a scheme estimated to be worth €20million over five years to provide more than 1,100 new student places

Also, the Department of Health has announced plans for a €150million tender for Community Nursing Units on 10 sites around the country.

One is due to be built in Letterkenny with a bed capacity of 50-100.

Mr McHugh added: “Public Private Partnerships of the scale of €150-200million are too big for some local enterprises to bid for. This is something I firmly believe should be changed.

“We need to know for sure is this the best value for money. We are told by the National Development Finance Agency that they deliver the highest quality value for money infrastructure but no cost-benefit analysis has been published.

“We need to protect our local industries and local employers and create the environment and opportunities for them to flourish and prosper. Effectively freezing them out of €150million plus contracts is not the way to do it.

“I will be raising this matter in person with my cabinet colleagues.”