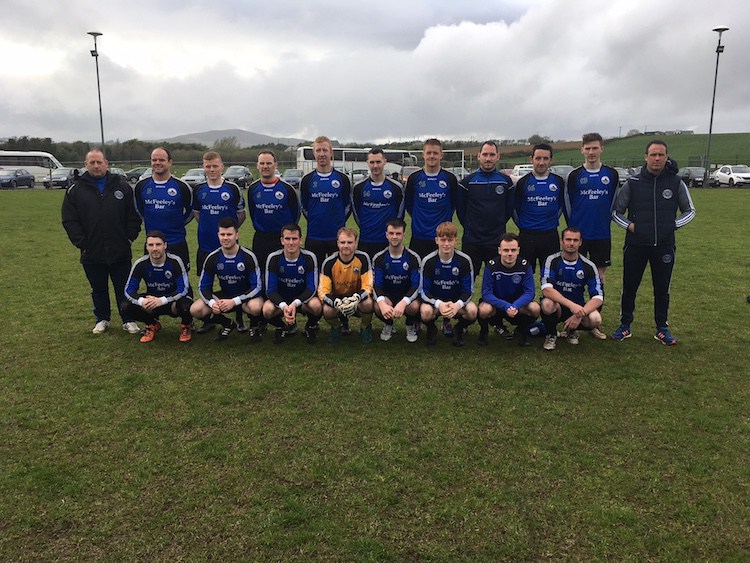 Played in glorious sunshine at Maginn Park on Saturday evening  this was the proverbial game of two halves with Dunree dominant in the opening forty five minutes but Rasheney came storming back in the second half. Dunree had the first effort when Thomas Doherty released Philip McGuinness on the left and his cross was flicked goalwards by Darryl Moran but Sean Friel gathered easily.

They took the lead on 5 minutes after an in-swinging McGuinness free from the right was headed home to the bottom corner by Ryan Bradley.

Then a Moran corner was flicked goalwards by Liam Baldrick but Friel gathered easily.

On 21 minutes Daniel McLaughlin turned smartly inside the area but his effort was beaten away by Friel before being cleared.

Rasheney’s first attempt on goal came on 33 minutes but Charlie Doherty fired well over from distance Rasheney almost equalised after a superb free from Damien Friel found Anthony Doherty ghosting in behind the Dunree defence but he bundled the ball wide from close range.

Dunree replied on the stroke of half time and when McLaughlin hooked the ball back  from inside the Rasheney area McGuinness collected and unleashed a 25-yards effort which crashed off the bar.

Rasheney started the second period the better and a Declan McLaughlin cross was headed over by Charlie Doherty under pressure from a defender.

Charlie Doherty then controlled a long ball and fired  a looping volley which landed on the roof of the net.

On 76 minutes Matthew McLaughlin laid the ball back to Damien Friel whose 20 yards curling effort looked destined for the top corner but Philip  Doherty produced a brilliant one handed save to turn the ball around the post.

Minutes later Friel again produced a curling effort but it sailed inches past Doherty’s left hand post. Rasheney almost snatched the winner on 87 minutes after a corner broke inside the area to Charlie Doherty whose left footed effort crashed off the post.

Rasheney clinched the cup  in injury time after a sweet left foot strike by substitute David McLaughlin was superbly parried by Doherty but Charlie Doherty reacted first to slam the loose ball home.

For Dunree Philip McGuinness and Liam Baldrick were especially prominent while for the winner Shane Gordon and substitute David Mclaughlin had excellent second halfs. But the award on the night goes to match winner Charlie Doherty who was involved in the majority of Rasheney attacks in that second half.