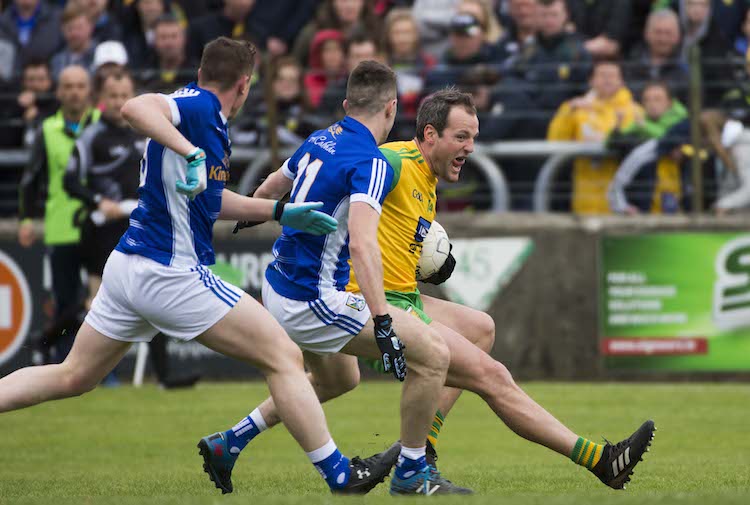 Donegal are now unbeaten in 21 League and Championship games at MacCumhaill Park after seeing off Cavan.

Goals in either half by Ryan McHugh and Cian Mulligan helped secure a quarter-final berth for the Tir Chonaill men, for whom Murphy was the architect in chief.

“He’s a real leader, no doubt about it and he’s coming into really good shape now and playing really well,” Bonner said of his captain.

“He’s an important part of the whole group.”

The goal arrived when Ryan McHugh batted to the net after a free from Murphy dropped invitingly.

Donegal, with Michael Langan carrying the can alongside Murphy, were 1-10 to 1-6 in front at the break and Bonner was impressed by his team’s attack, with a Murphy free early in the second half their first score from a dead ball.

Bonner said: “Yeah we had opportunities, no doubt about it. We maybe created four or five goal chances, we took two.

“But listen, we’re pleased to get over the line today and it’s nice to start the Championship with a victory.”

Patrick McBrearty – who had been Donegal’s top performer in the League – didn’t score until the 59th minute, but the Kilcar ace hit four late points for the winers.

And in the final minute, Cian Mulligan, a substitute, drove into the bottom corner for Donegal’s second goal.

Bonner added: “We’ve a good record here in Mac Cumhaill Park and we want to keep that. There was a nice crowd here, a good day for Championship football and at times we did play really good football, other things we have to improve.

“We’ll go back and reassess where we’re at and then we’re ready for Derry in two weeks time.”