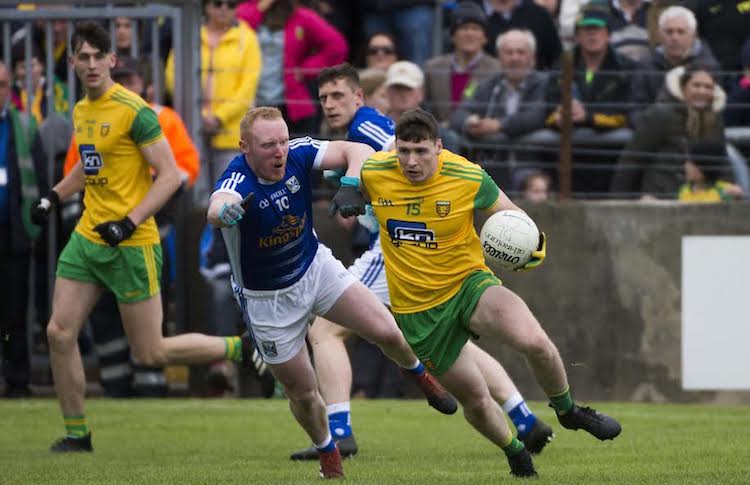 Donegal got their 2018 Championship campaign off to a winning start on Sunday as they overcame Cavan in Ballybofey.

Michael Murphy really rose to the occasion on Sunday. The Donegal captain turned in his best Championship performance for some time. Led the way in so many facets of the game.

Murphy kicked six points, three off them from frees, but he wasn’t just Donegal’s leading marksman.

Although named at number 14, Murphy lined out in a deeper role. From there, the Glenswilly man orchestrated Donegal’s win with a commanding display.

Often, Murphy would be Donegal’s furthest man back and it was from his post around the middle of the park that he played the part of Donegal’s quarterback.

It was a magnificent 70 minutes from Murphy, who was edged for the Man of the Match award by the majestic Michael Langan.

There are few of Murphy’s Championship displays that could match Sunday’s.

2. The old dogs for the hard road

When Frank McGlynn was withdrawn late in the game, Sean Mac Cumhaill Park rose as one to acclaim the Glenfin man.

The 2012 All-Ireland winner gave it another go under Declan Bonner this year and has timed his season to near perfection.

McGlynn was excellent on Sunday and that standing ovation was merited after a fine performance.

At full-back, Neil McGee also wound the clock back somewhat to show just how valuable he remains.

Donegal have been pretty open for much of 2018 so far and it was something Declan Bonner touched upon when he spoke after the game.

Donegal conceded 1-15, a tally that would ordinarily lose a game in Ulster.

“We’re probably going to have to tighten up,’ Bonner admitted.

Caoimhin O’Reilly bagged the Cavan goal after just 16 minutes during a good spell for the Breffni and Bonner will certainly want his side to be meaner in a couple of weeks’ time when they head for Celtic Park.

Donegal won Ulster titles from the preliminary round in 2011 and 2012 after building up a head of steam.

Winning Ulster from the preliminary round is not something that has been done too often in the past, but Donegal bucked the trend winning successive titles under Jim McGuinness.

There’s still a long way to go for Declan Bonner’s class of 2018, but they could well reap the benefits of an early start.

Certainly, the likes of Shaun Patton and Stephen McMenamin, who made their Championship debuts on Sunday, will be all the better for it.

If Donegal are to be in it for the long haul this year then Sunday – when they extended the unbeaten Ballybofey record to 21 League and Championship games – will stand them in good stead along the way.

Donegal GAA projected an attendance of around 12-13,000 for Sunday’s game.

The reality was that only 9,612 paid in for the Ulster SFC opener.

That was short of the 11,250 who turned up for the final Allianz League showdown against Mayo and was Donegal’s lowest home Championship attendance since 2011.

Many supporters had been critical in the lead-up about the Ulster Council’s price hike with stand tickets for Sunday’s costing €28 and terrace tickets priced at €18.

Sunday’s game was not live on tv and Donegal won’t feature in live until a possible Ulster final, but supporters appeared to have voted with their feet at the weekend.