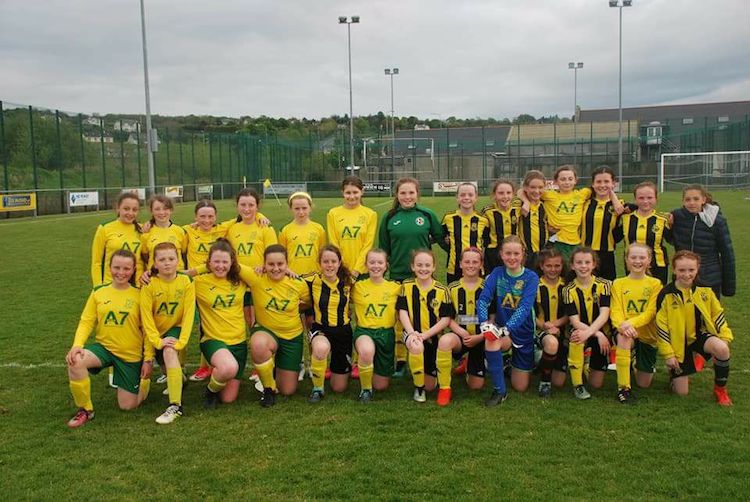 Mulroy Academy and Illistrin FC opened up a six-point lead at the top of the Donegal Women’s League Under-12 League on Monday night with comfortable away wins.

Picture: The Bonagee United and Illistrin FC teams who played in the Under-12 League on Monday.

A hat-trick from Eva Blaney helped table-toppers Mulroy to a comfortable win against a young Raphoe side who battled to the end, but the visitors were much too strong all over the pitch and were good value for their win.

They might even have had more had it not been for a superb display from Raphoe keeper Ella McCarron who made several great saves especially early in the game as the home team worked hard to frustrate Mulroy.

The breakthrough finally came in the 13th minute when Clodagh Herron raced clear to score and she added a second in the 21st minute after constant pressure on the Raphoe goal.

Ella McHugh led her team superbly and the Raphoe girls kept playing some good football, but Mulroy always had the edge and Rachel Friel added to their lead just before the break with a well-taken strike.

Samara McBrearty and Alicia McCullagh tried to break Raphoe forward and they did combine to work a chance for Ella McHugh, but the the Mulroy keeper made a good save and that was as good as it got for Raphoe.

Mollie McGroarty, Cara Eaton, Aine O’Flanagan and Aimee Connolly all battled hard in defence but the Mulroy pressure was relentless and Eva Blaney completed a second half hat-trick and Emma McGrenaghan chipped in with another as Mulroy chalked up another three points.

The visitors defence commanded by Claire McCarron made it difficult for the attacking Finn Valley side but they eventually got through and took the lead coming near the half time mark with a brilliant shot from Avelina Ward.

Coming back from half time Swilly were first to score with Kirstin Stewart finding the back of the net.

Maria Kelly played a brilliant part in deflecting the visitors attacks from the back line.

The Valley continued to but pressure on the Swilly keeper Aine Connolly, with some near misses from Sarah Conaghan and Leah Lawne.

Sarah Conaghan finally was rewarded for her persistence with a hattrick, one of which coming from a penalty.

The game then finished at 4-1.

Both teams battled hard throughout the entire game which made it very entertaining to watch.

On a summers evening in Lurgy Park, Kilmacrennan got off to a great start with a solo effort from Joycelene Diver in the first minute putting Kilmacrennan in a comfortable position.

Although Gweedore came back with great performances from Maria Gallagher in defence and Aine Ferry, a goal each from Lucy McGarvey and Sarah McFadden left it 3-0 at half time.

In the second half Mary Anne Ward really came into the game but found no way past the outstanding Kilmacrennan defence led by Siobhan Cameron.

A goal from Maeve Brady and two more from Lucy McGarvey put the game out of sight in Kilmacrennan’s favour.

Player of the match here was Siobhan Cameron for Kilmacrennan but Aine Ferry of Gweedore and Lucy McGarvey of Kilmac put in a great performance too.

Illistrin were the visitors at the Dry Arch Park and started the game very brightly with Leanne McGettigan scoring three goals inside the first 12 minutes.

Bonagee started to settle a little more and got the ball down with Grace Murphy and Chloe Creevy making some good runs but found it hard to get past the tough Grace Nugent.

Eve McCauley and Nugent added to the Illistrin scoresheet and the girls put in a great performance with some good play from Nugent and McGettigan.

Creevy scored Bonagee’s only goal of the night and with the absence of Katherine Hopkins young Ginny Diver put in a fine performance at centre back.

Team performance for Bonagee with Diver putting in another great performance

Lagan had some very strong attackers. Mulroy goals came from Kayla Sweeney in the first half and Lucy McGonigle in the last minutes of the second half. Lagan had seven goals in total, with Orla Doherty and Sophie Canning standing out for the side.

Canning scored twice early on and Sonia Gallagher also registered in the first half for Lagan.

Doherty, Canning, Eileen Sweeney and Siena Harris were on the mark for the visitors in the second half.

Donegal Women’s League – here’s all the latest from the Under-12 League was last modified: May 16th, 2018 by Chris McNulty