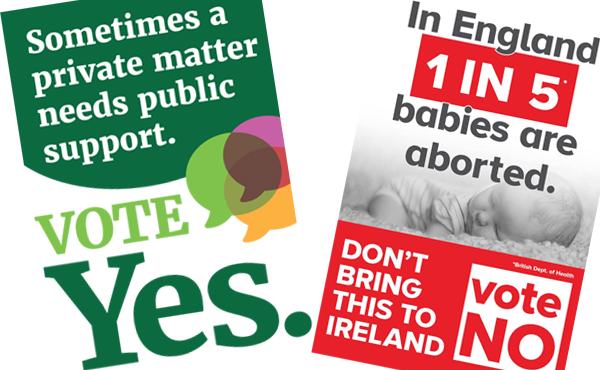 A local road user has expressed their frustration and concern over the placement posters in the 8th amendment referendum campaign.

The days leading up to polling day have seen an increase in posters from both campaigns on roads across Donegal. Posters calling for Yes and No votes have been placed on many polls and signs in urban areas and along main roads – sometimes two or three per poll.

A local motorist says posters are obstructing motorists’ views in certain areas, which they deem to be against campaign poster regulations.

In a letter to Donegal Daily, they call on campaign groups to be wary of road users and the law when placing posters.

“For the last number of weeks the referendum campaign posters have been increasing there presence around the county. As a professional driver I have had a few close “near misses”. As campaign posters on blind corners obstructing views of motorists. After looking into the rules and regulations of election and campaign posters:

“The Road Traffic Acts contain requirements in relation to maintaining clear lines of sight for road users which may impact on where posters can be placed, e.g. not on road signs, at traffic junctions or on roundabouts where they may cause road safety risks. It is an offence to erect any sign or notice that makes a traffic sign less visible to road users (Road Traffic Act 1961, Section 95, Subsection 14).

“Today alone I travelled one of Inishowen’s most dangerous roads R238 from Muff to Redcastle counting nine posters of both campaign parties attached to road signs. As well as blind corner obstructions at Tulnaree Carndonagh and around many junctions and roundabouts.

“I understand the importance of this referendum to Ireland as a nation but yet again I find it frustrating that the organisers and campaigners cannot abide by the rules set in place. Some of the roads in Donegal are not great at the best of time without these obstructions.

“I’m coming from the age group between 17 and 28, which are paying the highest insurance policies in the country as we are seen as the liability, and I myself having known people lost on our roads.

“What I am trying to say is that our roads are dangerous enough without people creating more hazardous and dangerous situations with the strategic placement of these posters.”

Comments and stories may be sent to info@donegaldaily.com