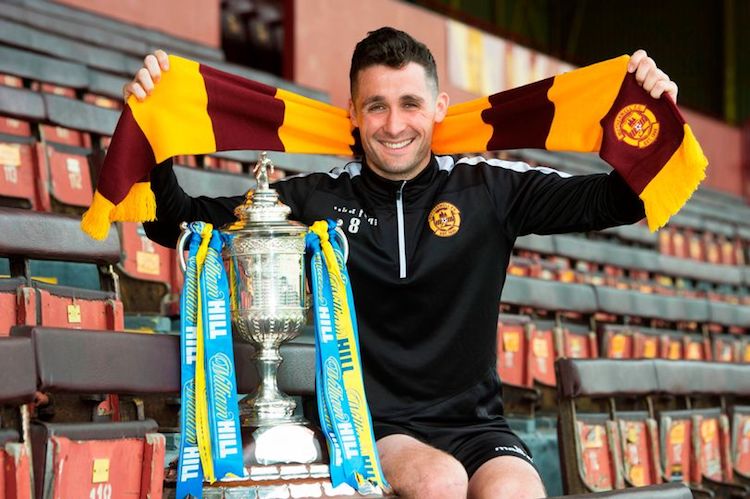 Carl McHugh hopes to make it a case of third time lucky on Saturday when he leads Motherwell out for the William Hill Scottish Cup final against Celtic at Hampden Park.

It will be the third major final in the career of the the 25-year-old from Lettermacaward.

He lined out with Bradford City at Wembley in 2013 when they lost to Swansea City in the Capital One Cup final and in November he captained Motherwell to the Scottish League Cup final, also against Celtic.

However, goals by James Forrest and Moussa Dembélé meant Celtic left with the trophy after a 2-0 win.

McHugh and the Steelman are aiming to upset the odds against Brendan Rodgers’ Hoops.

“We’re going to give everything to the cause and hopefully we can do it,” McHugh said.

“We don’t want to go there now and just take part. We want to go and win the cup and we have full belief in each other that we can go and do that.

“We’re fully confident we can do it. We can go and win the game.”

McHugh scored a memorable goal against Hearts in the quarter-final, but had to sit out the semi-final because of a suspension.

Stephen Robinson’s Motherwell finished seventh in the League this year and have reached the two Cup finals.

McHugh said: “It’s been a big improvement on last season.

“We’re disappointed we didn’t make the top six because that was one of our aims at the start of the season, but getting to two cup finals cushions the blow a bit.

“We’ve got one more massive game and we want to make a good season an unbelievable season.”

Motherwell are bidding to win a first Scottish Cup since 1991 and McHugh added: “We’ve given them everything we’ve got this year. We work so hard every game and every day in training and it would just be brilliant to win it with this group of boys.

“It’s a special dressing room so it would be so special to win it with them.

“It would be the biggest achievement of my career by a long way.”