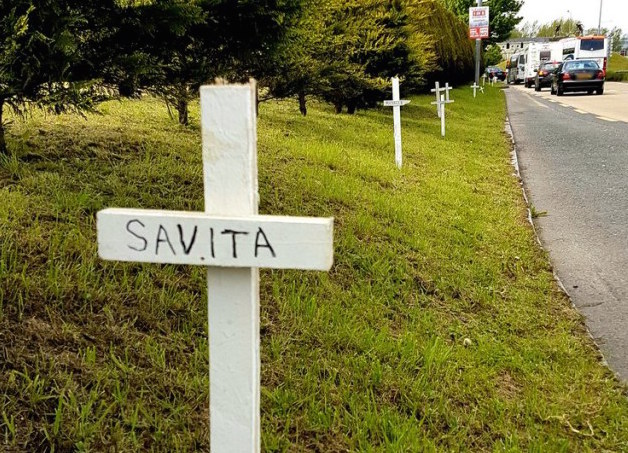 A woman who was so angry at 17,000 white crosses being put up on a roadway by the NO campaign in the abortion referendum that she literally took it into her own hands to change it.

Donegal woman Taryn De Vere was outraged after dozens of pro-life campaigners spent hours erecting the crosses along the 30kms of roadway from Letterkenny to Bridgend.

So she went out and tried to change the message sent out by the crosses.

Many motorists were left shocked by the cross campaign, which is understood to symbolise the lives of children.

But pro-choice campaigner Taryn De Vere decided something needed to be done to remember the women who died as a result of the abortion situation in Ireland.

So she went out and wrote the names of many of the women associated with the abortion controversy including Savita Halappanavar, Ann Lovett, Michelle Harte and Bimbo Onanuga.

Taryn said she has written these names to symbolise the many women of Ireland whose lives have been affected by the 8th amendment.

“I was really upset that so much work had gone into suppressing my and other women’s rights,” she said.

“Those women were actual people, with friends and family not abstract concepts. The No campaign keeps erasing women from their messaging, they want us to imagine that the women of Ireland will go on a murdering spree if there isn’t legislation to stop us. It’s offensive and wrong.

“The 8th has caused the death of several women and harmed hundreds of thousands of women but those women do not seem to matter to No campaigners.”

Donegal County Council confirmed today that they would remove crosses in certain areas “that are causing a hazard to either pedestrians or road users.”

Woman takes ‘cross’ issue into her own hands to remember those who died was last modified: May 22nd, 2018 by Stephen Maguire