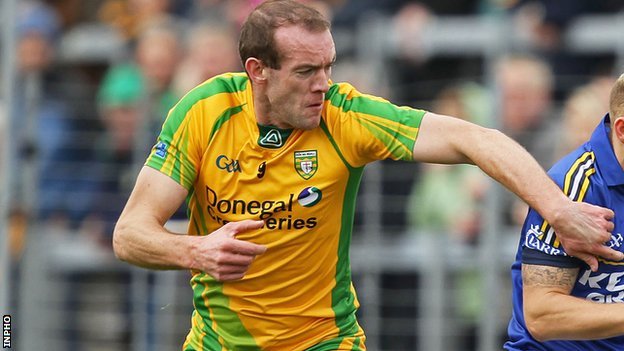 Glenswilly strike late in the day to see off Milford

GLENSWILLY CAME GOOD in the second half to see off Milford in their All-County Football League Division 1 clash this afternoon.

Danny O’Donnell’s side have been in good form of late and even defeated the three-time county champions away from home last month.

Today, it looked as though the home side at Moyle View were on their way to repeating that success, only to get wound in as Brendan Walsh’s team took the points.

Milford had a three-point interval advantage, 0-9 to 0-6, and that could’ve been even more had Philip O’Donnell, the Glenswilly goalkeeper, not denied Kyle Black from an 11th minute penalty.

Glenswilly did protest the award claiming that there wasn’t much contact between Oisin Crawford and Darragh Black.

It was 0-6 to 0-6 approaching the interval but Milford made their cushion late in the half, with Cathal McGettigan scoring twice and Darragh Black also on target.

That lead was severed down to one when Cathal Gallagher scored a 45 and Keelan McFadden was on the mark and were level by the midpoint of the second half when Caolan Kelly scored, 0-10 to 0-10.

Luke Barrett was in fine form coming off the bench for Milford and he edged his team a point to the good in the final minute. However, Gary McFadden’s seventh of the day tied it up and points in injury time from Ciaran Bonner and Neil Gallagher gave Glenswilly a useful win.