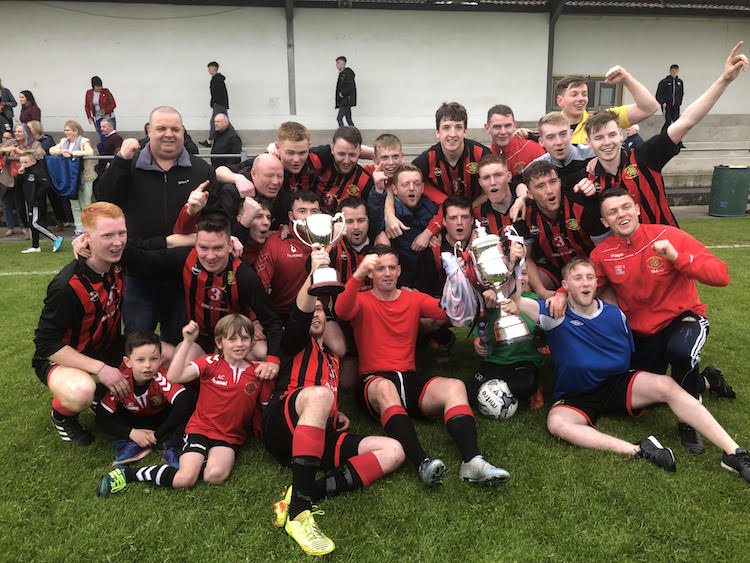 Early goals by Aidan Sweeney and Daniel McLaughlin had Kilmac 2-0 up by the 20th minute, but Kildrum hit back and, for the second week in a row, netted a 91st minute equaliser as Jonny Carlin sent the tie to extra time.

A week after winning the Premier Division in the 91st minute, the Tigers hit back here in similar fashion after Kevin McHugh’s free kick set up the grandstand finale.

Kildrum goalkeeper Shaun Friel was another hero of the hour with saves from Gary Gorman and Caolan McDaid in the penalty shoot-out.

Kilmacrennan had a dream start with a goal after just 150 seconds.

Rab Sandilands provided the delivery and Sweeney still had work to do, but his header was delightfully-placed. As Sweeney took aim, Tigers goalkeeper Shaun Friel was off his line and the midfielder’s effort popped in for the lead goal.

The second arrived on 20 minutes and came via a well-worked move. Ryan Shields and Michael McLaughlin made the initial noises with the latter’s cross tucked back across Friel to increase the lead.

It was game on when Kevin McHugh hauled Kildrum into it again on 71 minutes. McHugh slalomed his way from deep to win a free-kick and stepped up to neatly curl home from 20 yards.

In the first half of extra time, both teams were reduced to ten men as Kieran Gorman and Michael Lynch were sent off for their part in a fracas and, soon, Kildrum

Brown made three changes to the Kildrum side from the XI that began last Sunday’s Premier Division-winning draw against Castlefin.

The battle-scarred Jonny McGinty, with 12 stitches on an eye wound sustained last weekend, missed out with his younger brother Brett coming into the heart of the rearguard.

Oran Higgins and Gareth Colhoun were also elevated into the Tigers team, taking the places of Daniel Clarke and Jamie McKinney.

Kildrum had started brightly, Carlin hooking over after a corner fell invitingly in the penalty area, but Kilmac’ seized the initiative when Sweeney headed home.

McLaughlin’s hit a second for the Lurgy-siders after a let off when Kildrum might have levelled.

The resulting corner found Michael Lynch, but his goal-bound header was blocked.

Kildrum were rocked as McLaughlin doubled Kilmacrennan’s advantage but on the half-hour, Kevin McHugh whizzed just over the top with a reminder that Kildrum weren’t ready to get their coats.

McHugh cracked one free kick off the crossbar on 69 minutes but, just two minutes later, from just outside the box, the former Finn Harps star beat Quinn to reduce the arrears.

Kilmacrennan thought they’d put the issue to bed when McLaughlin tucked home a second time after getting on the end of Caolan McDaid’s pass, but the flag from Dessie McLaughlin, the assistant referee, cut short the celebrations.

McDaid himself was almost bearing down on Friel when centre-back Michael Lynch came in with a timely interception.

Kildrum themselves were getting anxious and Damian Crossan, their hero of the hour seven days previously, rose an attempt just too late to trouble Quinn with 12 minutes to go.

The buzzer was closer still when Brett McGinty shave the post as he wormed free to get his head on a corner.

It was in red time – ‘Wizzy time’ they may now call it in St Johnston – when Carlin pounced, bedlam ensured.

For Kilmacrennan, heartache and for Kildrum, sheer ecstasy.