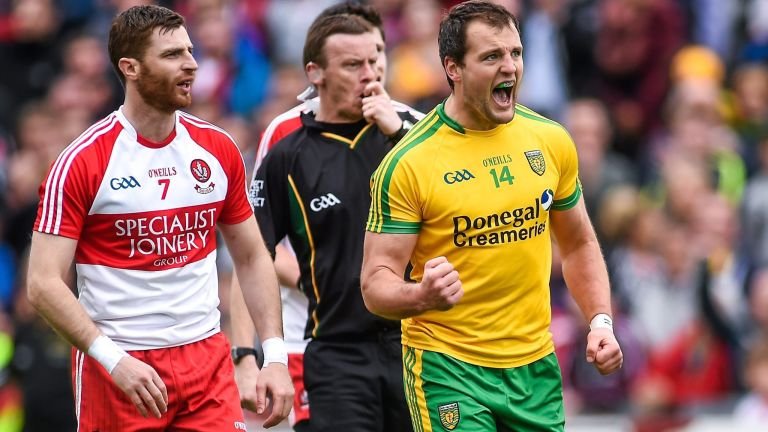 Donegal have not faced Derry in the Ulster Championship since the 2015 semi-final which took place in Clones.

On that day Declan Bonner was managing the Donegal minor squad who suffered a narrow defeat to a Conor Glass inspired Derry side. The seniors had contrasting luck though and they managed to make it into a fifth Ulster final in a row.

On Sunday, Donegal enter Celtic Park knowing that in recent years they have had the upper hand over their close rivals. 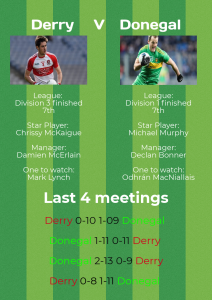 The last time Derry beat Donegal in a championship game was back in 2008, when Derry aided by impressive performances from both Eoin and Paddy Bradley came away with a two point victory.

This weekend both sides will battle to achieve a semi-final spot against either Antrim or Down. 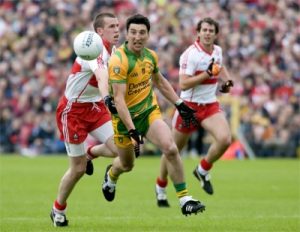 This was Donegal’s first Ulster Final of the Jim McGuinness era. In front of a crowd of 28,364, Colm McFadden and Michael Murphy powered Donegal to a fairly comfortable victory. Murphy’s penalty in the second half was the vital score in the game and it proved vitally important as Derry were never really fit to recover from it. Both the Bradley brothers were absent from the Derry side and this was a key factor as they lacked scoring ability up front. Michael Murphy got his hands on the Anglo-Celt after seventy minutes of action-packed football. 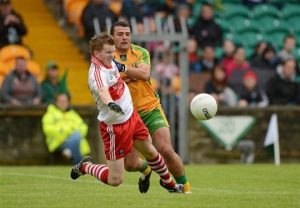 Eleven months on from Donegal’s six point victory over Derry there was a much more relaxed win for Donegal in the quarter-final clash of 2012. Ten points was the margin this time and once again it was Donegal’s inside line that caused Derry multiple problems. Paddy Bradley was making his first championship appearance since 2010 but he failed to cause Donegal much bother. A Leo McLoone goal before half-time gave the home side a 1-6 to 0-4 lead at the break. Another goal, this time from McFadden and points from both Murphy and McBrearty ensured victory. Paul Durcan claimed a clean sheet off the oak leaf county for the second year running. 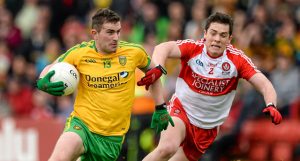 Donegal, still under the management of McGuinness and on a year where they would go on to an All-Ireland final faced one of their stiffest battles against Derry. After a first half which was somewhat disappointing for the neutral Derry opened a 0-6 to 0-4 lead thanks to a strong performance from Mark Lynch. But Donegal seized a goal opportunity in the second half with Leo McLoone breaking Derry hearts once more. They kicked on after this and held out for a three point win despite leading by six at one stage of the second half. 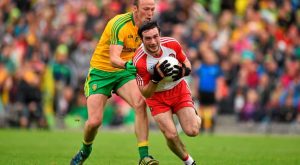 Another massively tight contest between the two and their most recent meeting in the Ulster championship. A first half of action that had both defences on top meant the sides went in level at 0-5 to 0-5 at the break. Martin O’Reilly hit the back of the net on the forty-fifth minute to give Donegal a five point lead. Despite only scoring one point in the last twenty-five minutes Donegal held out to book a spot in the final.

Subs: B Heron (0-01) for McGoldrick, L McGoldrick for Duffy, T O’Brien for Lynn, N Loughlin for Bradley, Lynn for O’Boyle, C McAtamney for Rogers (BC).