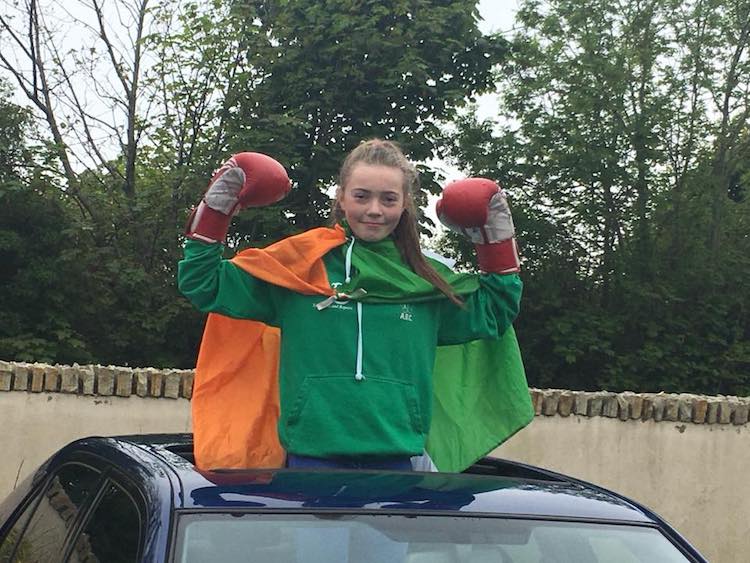 written by Chris McNulty May 22, 2018
FacebookTweetLinkedInPrint

Just nine months after the club’s home was destroyed by flooding, Dunree Boxing Club were celebrating the arrival of an Irish title at the weekend.

Collins overcame Macy Cunningham from Crumlin in the final at the National Stadium on Friday night.

Collins swept the scorecards to claim victory on a unanimous decision from the judges at ringside.

Back in August, Dunree BC’s home was swept away in the flash floods that terrorised the Inishowen peninsula.

Equipment was washed away from their Celtic Park base just outside Buncrana and the brick walls on the shed were torn down.

At the time, Fergal Doyle, a coach at the club, reckoned that ‘fish in the Crana River are wearing our headgear’.

Dunree launched a big drive to get back on their feet again and it’s all been worthwhile as Collins fought her way to glory amid jubilant scenes.

This weekend, another four Donegal boxers are in National Girls finals action.

Gallen takes on Keisha Attwell from Ennis in the Girl 5 66kgs final on Saturday at the National Stadium.

Duffy is up against Chloe Black from Tullow in the Girl 1 39kgs final on Friday, the same night Lafferty faces Aliyah Flood from Monkstown in a Girl 1 41kgs final.

On Saturday, McMenamin comes up against the might of Evelyn Igharo from Clann Naofa in the Girl 6 final at 63kgs.

Igharo won a silver medal at the recent European Youth Championships in Italy.