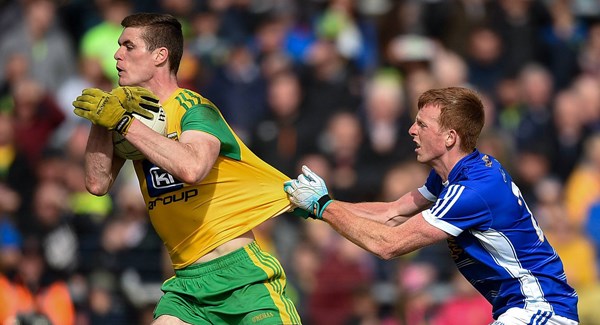 Caolan Ward says that training intensity is getting higher and higher

written by Stephen Maguire May 23, 2018
FacebookTweetLinkedInPrint

Caolan Ward has admits that the competition for places in this Donegal team is keeping everyone on their toes.

The St Eunan’s defender stands at six foot three and is entering his third season on the senior panel. Ward can play in a range of positions in the defence line but was given a license to roam forward in last Sundays clash with Cavan.

The switch in role seemed to suit Ward perfectly as he prodded over an excellent point and also played Paddy McBrearty in on goal with an excellent kick pass. Unfortunately for the Kilcar man his effort was stopped by the Cavan keeper.

Ward admitted that this was a role he enjoyed, “If you’re a one-trick pony, then you are going to be found out easily.

“You have to be able to play a number of positions. In any period of play, you could find yourself at corner-back or half-back, or the centre, and you have to just fill out your role.

“For me, I have no problem with wherever I’m stationed and I’m comfortable enough, but obviously I prefer to be a wee bit further out the field.”

The competition for spots in the team has been heating up since the beginning of the championship with players returning from injuries.

“You have to have competition to improve players, so I only see that as a good thing.

“The way we are going at the minute, we probably have two or three players for every position, and that’s only going to benefit the team.

“Within that we have players that can play a number of positions whether it’s in defence or the forward line, so in terms of players that missed out, they’re going to come back and make us stronger.

When questioned about the impact that the returning Odhrán MacNiallais and Paddy McGrath could have on the team Ward stated, “They have to earn their positions again, and they are two very good footballers that play in different positions.

“Paddy is a man-marker and Odhran is more of a play-maker but if they are fit to go and Declan gives them the shout, then we’ll not argue with that as we know it’s only going to improve the team.”

Generally the championship is played at a much faster pace than that of the league. The Cavan game was a sign of just how different it can be. Cavan were promoted to division one this year yet Donegal were relegated down to division two.

It was clear to see last Sunday that both teams were quite a bit apart in terms of ability and that showed how teams can really progress from league to championship.

Ward usually marks Paddy McBrearty or Michael Murphy in training and he says that the passion being shown in training is brilliant to be a part of.

“The intensity just keeps getting higher and higher which is good to see because you have boys coming ready for training, and if you can surpass that level you trained at in a game, then you’re setting yourself up well for what’s going to come in the next 70 minutes.