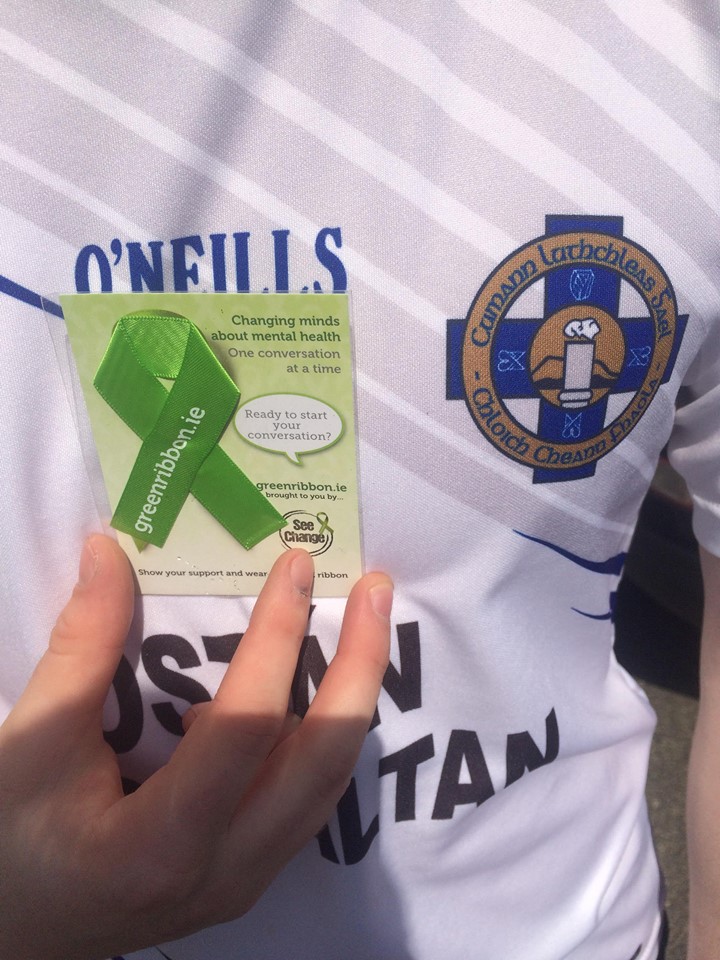 Players from both Cloughaneely and Naomh Conaill showed their support for mental health awareness on Sunday by sporting a green ribbon on their jerseys for their division one clash.

The notion was brought forward by Stephen Doohan, the health and well-being officer at the Cloughaneely club. He got the idea from the Donegal game the previous Sunday and felt it was an important matter and certainly one that needed discussed.

After getting the green-light from referee Robbie O’Donnell before the game, both teams wore the green ribbons on the sleeve of their jerseys.

Doohan who featured in the reserve game on the day stated that he felt it was an important gesture to make in order to help with raising awareness for mental health.

“I can’t claim the full idea as Kevin Mulhern suggested that the players wear them on the sleeve of the jersey after I proposed we wore them on our tracksuits to the game,” he said.

“I thought that was a much more powerful statement to make so we ran with it. I then decided to get in contact with Martin Regan just to pass it by him and he also thought it was a great idea.”

The annual Green Ribbon Campaign takes place every May, and aims to get people talking openly about mental health problems. This campaign promotes open conversation about mental health and it challenges the associated stigma that sometimes comes with it.

More than 500,000 free green ribbons are distributed every year to spark a national conversation about mental health in boardrooms, canteens, and around kitchen tables throughout Ireland.

Doohan went on to say that every club and sport alike should try their best to wear the ribbon for the month of May and do their best to support the cause.

“It’s really important to raise awareness, it’s said that one in four will have a mental health issue in their lifetime.

“I suppose we all have challenges every day and life can be stressful from time to time be it work, financial, home, relationships whatever.

“Following on from the great work that Darkness Into Light do it’s just another little touch and if it helps even one person to talk about their problems then it will have been worthwhile,” he concluded.