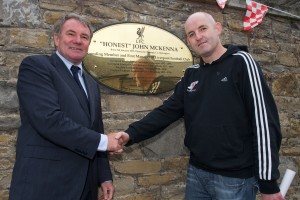 Donegal based David Moen has dedicated a plaque to the Irishman who was Liverpool’s first ever manager, but if Liverpool manage to clinch victory on Saturday night he may need to dedicate one to Jurgen Klopp as well.

The die hard Liverpool fan will this week be using cars, coaches and planes to make the 3,200km trek from Donegal to Kiev for the Champions League final.

David and fellow Liverpool fan Kevin Neely will leave Letterkenny on Friday morning. They will then fly from Dublin airport to Warsaw via Frankfurt.

14 hours after departing Warsaw on a coach they will finally reach their destination on the morning of the big game.

Moen, who was born in Monaghan decided to unveil the plaque of John McKenna in his home town of Glaslough as a sign of the journey the club have made.

McKenna took over as Liverpool manager in 1892 and guided the club into the English First Division just four years after they formed. In his thirty years at the club Liverpool won three First Division titles with McKenna taking up a number of different roles.

McKenna himself was a Monaghan man which is something that no doubt encouraged David Moen to dedicate the plaque to him.

Moen is set to leave Kiev just hours after the final whistle blows. He expects to return to Letterkenny in the early hours of Monday morning after what will be another enduring trip for him.

However if Liverpool are to claim victory against Real Madrid it will surely be a much easier journey home for Moen.

Liverpool fan not going to chicken out of trip to Kiev now was last modified: May 23rd, 2018 by Stephen Maguire
Tags:
Champions League FinalDavid MoenJohn McKennaLiverpool