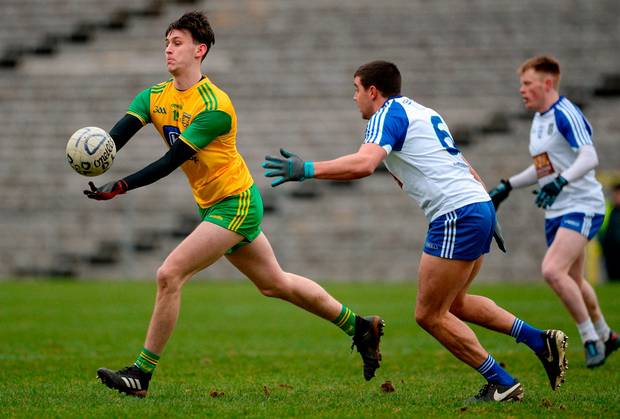 Langan performing beyond his years

Michael Langan knocked over three first half points against Cavan in what was a performance that any player on the pitch would have been proud of.

Each point seemed to be better than the one scored before it, bringing comparisons of Langan’s style of play to that of both Ciarán Thompson and Odhrán MacNiallias.

The tall rangy St Michael’s man is opposite to both of them in terms of the fact that he’s right-footed but he does have a many similar traits to them. The most common one would be that each of them are able to kick long-range scores but the ability of all three to beat a man for pace despite never looking at full pelt is most impressive.

Langan has long been touted as one of the most exciting prospects in the country and has been featuring on Donegal teams for years. He achieved his first medal with Donegal as part of the 2013 Buncrana Cup U16 team which was coached by Sean-Paul Barrett.

He has since gone on to find success in the Jim McGuigan U17 cup as well as claiming an U21 championship last year. The one that eluded him, the minor championship is one that Langan will feel slipped away, an inspired Conor Glass performance sent Donegal crashing out against Derry.

Langan will have bad memories of how things went that day and will be seeking revenge for that defeat this Sunday. After the Cavan game he was the name on most people’s mouths with many praising his performance as worthy of the man of the match award.

At just twenty Langan has a lot of pressure on young shoulders, but against Cavan it was clear that he plays his football in a calm manner.

St Michael’s have a history in the past of bringing talented forwards into the county panel. Colm McFadden and Christy Toye were for many years, two of the classiest forwards in the country.

It appears Langan has kept a keen eye on that duo over the years and has clearly taken a few facets of their skillsets and added them to his own. Langan sported the number 11 jersey against Cavan and he would be right to be entering this game with the mind-set that he deserves to reclaim it.

At the press day on Tuesday Declan Bonner did state that Odhrán MacNiallais would be back for the game at the weekend. MacNiallais, if completely fit would be expected to find his way back into the starting XV so one forward may have to miss out.

Of the six that were lined out in attack against Cavan only Frank McGlynn didn’t score but the Glenfin man played his usual deeper role.

The clash with Derry is likely to be an exciting one, Donegal have won four of the last five championship ties between the two.

Much has been spoke in recent weeks of having two players in every position to create a battle for places. It’s clear that this Donegal team has loads of competition for the attacking spots but it would be a very big shock not to see Michael Langan lined out in the half-forward line this Sunday.