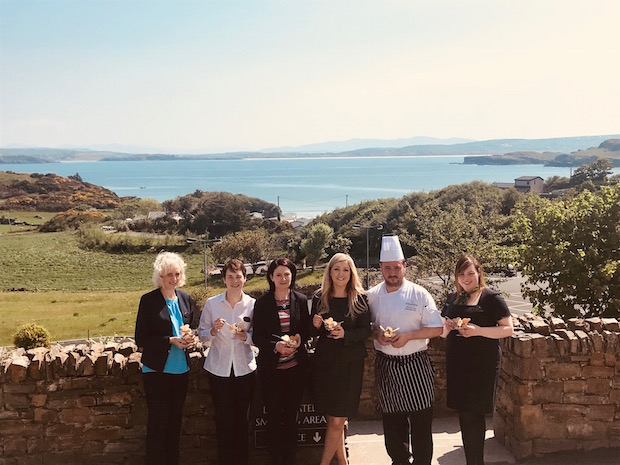 written by John2 May 24, 2018
FacebookTweetLinkedInPrint

DONEGAL is set for a bumper tourism weekend thanks to the superb weather and a Bank Holiday in Northern Ireland, the manager of a leading hotel in the county has said.

Carolynne Harrison, general manager of the Shandon Hotel & Spa in Port na Blagh, Dunfanaghy, says a series of marketing initiatives featuring Donegal on the Wild Atlantic Way is really paying off for the tourism industry in the county.

And she’s predicting a superb June for Donegal, kicking off with the Republic of Ireland Bank Holiday the following weekend.

“We have been busy at the Shandon Hotel & Spa right through the Spring and the weather forecast for this weekend has had our reception phone ringing off the hook,” said Carolynne.

“We are open all year round now thanks to the continued reduction in the VAT rate and the marketing of the Wild Atlantic Way to audiences both here in Ireland and in Britain.

“And when the sun shines it brings in extra tourists with a 20pc increase in bookings for this weekend mainly from customers in Northern Ireland who will be enjoying their bank holiday weekend but also from Britain too where Tourism Ireland have been really pushing Donegal in recent weeks through a media campaign.

“The following weekend is a bank holiday here in the Republic and we’ve only a few rooms left and I expect they will be fully sold out in the next few days.

“Donegal is now on the tourism map for customers from the rest of the Republic, with particular interest from Dublin and other Leinster counties.

“What has also changed however is the number of European and American visitors to the Shandon Hotel. That has doubled on last year.”

The 4-star hotel is set over-looking Marble Hill beach with stunning views of the Wild Atlantic Way and is a short distance from vibrant Dunfanaghy.

Manager Carolynne says the area of north Donegal is going to have a busy summer season.

“I believe this is going to be the busiest tourism summer for Donegal ever. There’s a really good vibe here,” she said.

“We’ve always known that we have an unrivalled product and I believe what we are seeing in 2018 are the results of Donegal being cited as the ‘Coolest Place to Visit on the Planet’ by National Geographic last year.”