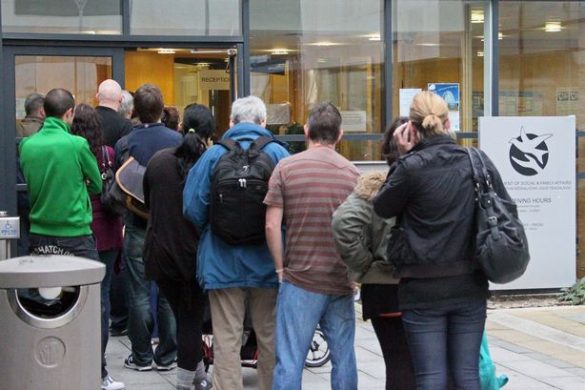 A woman, who illegally claimed almost €14,000 in social welfare payments, has been fined €500 in court.

Maighread McCaul, 46, from Ballyduff, Isle of Doagh, Clonmany, was before Carn Court where she admitted several charges relating to an overpayment of social welfare payments over a number of years.

The court heard that Ms. McCaul had received over payments to the amount of €13,774.67.

Prosecuting solicitor for the Department of Social Welfare, Ciaran Liddy, said Ms. McCaul applied for jobseekers allowance in February 2009. However, he said she commenced employment at the end of October 2013 and failed to make a declaration to the Department.

Mr. Liddy said social welfare payments continued until it was detected in April 2016 that Ms. McCaul was in employment.

He said social welfare inspector Morgan Mooney invited Ms. McCaul to attend for interview but the option was not taken up.

Mr. Liddy said no repayments have been made to date but a payment plan had been put in place.

The prosecuting solicitor said the payment arrangement that is in place remains outstanding.

Defence solicitor Ciaran MacLochlainn told the court the Department had arranged to deduct €15 a week from her social welfare payments but she had since started another job so when she notified the Department this arrangement changed.

Mr. MacLochlainn said Ms. McCaul had been working in various restaurants and hotels as a chef throughout this time. However he said the work was only available intermittingly and could range from two weeks up to a number of months.

“She had been gaining the work through a recruitment agency in Derry, who had been paying her one fee and charging the company another,” he added.

Mr. MacLochlainn said Ms. McCaul was single and lived alone in the Isle of Doagh.

He said her house was suffering from MICA and she had secured a loan of €8,000 from Buncrana Credit Union to carry out works in her home.

“She’s now paying the credit union back €50 per week and there is a motion before the County Registrar to have the home repossessed. Her house is a negative equity and this is all of huge concern to her.

“She’s at a cliff edge and I fear this may push her over the edge. Her finances are disastrous and I’d ask the court to take all this into account when sentencing. It’s not good to be in this situation at her stage in life,” Mr. MacLochlainn added.

The Buncrana solicitor said Ms. McCaul’s mother had been in court with her and she had been a great support to her, adding that her father died last year.

Judge Paul Kelly asked Mr. Liddy how the Department of Social Welfare recover their losses in cases such as these.

The State solicitor said the Department take their own steps to recover the money through deduction to social welfare payments or through civil action if that was needed.

Judge Kelly fined Ms. McCaul €500 and informed her that fine can be paid by instalments.

Woman who cheated €14,000 from dole is fined was last modified: May 25th, 2018 by Stephen Maguire
Facebook0Tweet0LinkedIn0Print0
Tags:
Carndonaghcheatcourtdolepayments