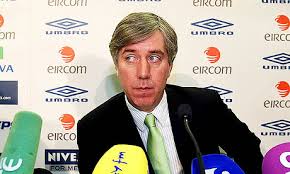 John Delaney has just given the Donegal League some great news

The FAI have approved grant assistance of €50,000 to the development of the Diamond Park, Ballyare.

The total cost of the latest phase of the project is around €300,000. FAI CEO John Delaney made the announcement via video at tonight’s Donegal League presentation function, held at the Radisson Hotel, Letterkenny. A new sand-based pitch has already been laid and will be ready to play on in a couple of months’ time.

Delaney and senior officials from the Donegal League met for over an hour in Ballyare with the League hopeful of securing grant aid from the FAI to aid the completion of the development.

On the first week in June, floodlights are to be erected with that process taking the best part of a month. Two new 12-seat dugouts will also be installed and a perimeter fence and pathway, as well as ball stops behind the goals, will be included in this part of the development.