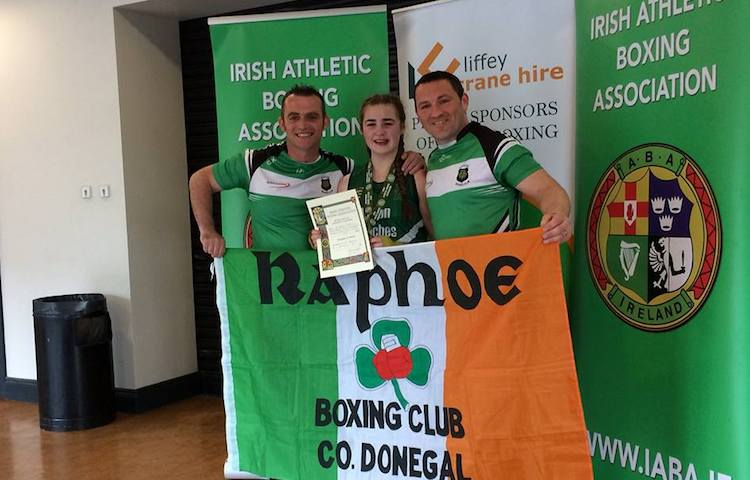 The 15-year-old defeated Keisha Attwell from Ennis in the Girl 5 66kgs final at the National Stadium.

Gallen’s talents have been obvious for some time now, from her formative years with Finn Valley ABC before she made the move to Raphoe.

Her hand was raised in victory after she impressed against the tricky Attwell, who had stopped Megan Hewitt in her semi-final last weekend.

When the sums were totted at the end, Gallen – pictured with coaches Gerard Keaveney and Gary McCullagh – had the verdict of four of the ringside judges. It was 4-1 in favour of the Raphoe puncher.

It has been some month for Gallen, who was part of the Donegal U16 side that defeated Cavan 4-10 to 0-5 in the Ulster final.

As the Girl 1 to 6 Championships came to a close, Gallen was the sole Donegal victor this weekend, adding to the success of Dunree’s Brenda Collins eight days ago.

There was no joy, though, for Sarah Marie Duffy from Illies Golden Gloves or Twin Towns pair Alecia McMenamin and Lani Lafferty.

Last night, Lafferty lost out to Monkstown’s Aliyah Flood in the Girl 1 41kgs final, while Duffy was beaten by Tullow’s Chloe Black in the Girl 1 39kgs decider.