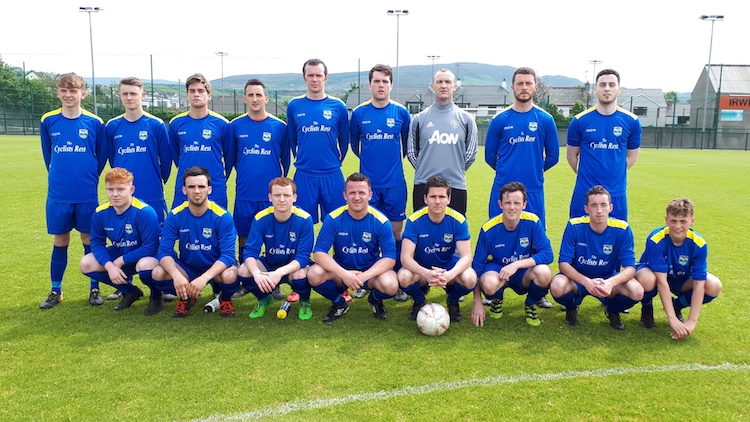 Aileach FC completed their 25th anniversary in style as they secured a treble haul of Cups after taking the Charlie O’Donnell Cup in a gripping battle with Glengad.

The Charlie O Donnell cup final took the curtain down on the 2017-18 season at Maginn Park on Sunday with Aileach and Glengad locking horns again and it was a brilliant game.

Glengad pressed further up the field from the start after last weeks defeat. After a bright opening Aileach created the first chance on three minutes when a superb Thomas McMacken through ball released Gareth McGlynn but he fired over from just inside the area.

Glengad replied and a burst from the back by John G McLaughlin released Terence Doherty on the left and he picked out Seamus Doherty centrally but his driven effort was straight at Peter Devlin.

Aileach broke the deadlock on 19minutes when McGlynn spread a free kick out wide to Darren McMonagle on the right and his brilliant cross was slotted home by Ronan Coyle at the back post.

But Glengad got back on terms within a minute after Stephen McLaughlin cut in from the left and evaded a tackle before firing a superb low effort inside Devlin’s right hand post from twenty two yards.

Glengad went close then when Doherty played  a superb pass into Patrick McDermott but his effort was parried behind by Devlin at full stretch.

Glengad then broke quickly through the middle and McLaughlin again unleashed an effort which flashed narrowly past the left hand post.

Aileach responded but McMonagle blazed over under pressure from a tight angle on the edge of the area.

A brilliant run by Terence Doherty ended with a pass to Cathal McDaid but Devlin smothered  well on the edge of the area. Glengad took the lead then on 38 minutes with another stunning strike after Seamus Doherty unleashed a sweet 25-yards left footed effort which flew just inside Devlin’s left hand post.

But this time Aileach equalised within three minutes when Thomas McMonagle retrieved a deep cross and laid back to brother Darren whose curling cross from the right was headed home superbly by Coyle.

As expected the tempo of the second half dropped largely due to the searing heat but both sides created dangerous openings which were defended well in the opening fifteen minutes. Just after the hour mark a sublime touch by Coyle took him away from a defender but he fired over from the edge of the area.

At  the other end substitute Christopher McLaughlin flashed an effort from 20 yards narrowly wide.

Aileach regained the lead on 76 minutes with a brilliant goal when Anthony Doherty broke on the right and played a superb pass into McMonagle who controlled and slid the ball past the advancing McLaughlin.

Aileach broke in injury time and when Coyle bore down on goal John G McLaughlin made a brilliant goal saving tackle before substitute Caoimhin McFeely broke clear but fired over but the final whistle blew after that and Aileach celebrated a cup treble.