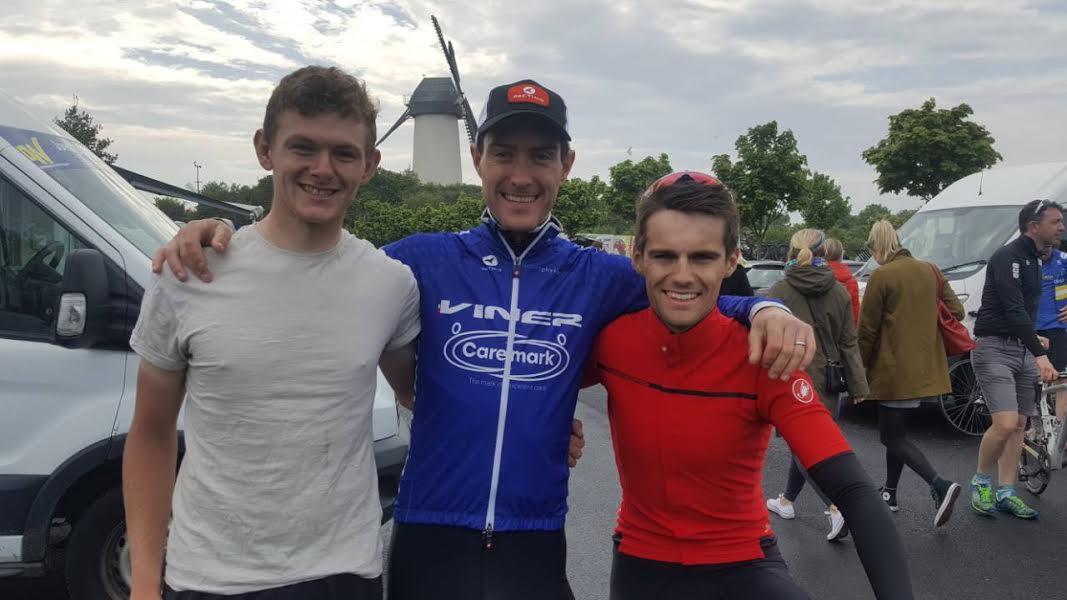 The three Donegal riders who took the starter’s flag in Drogheda last Sunday all finished the Rás Tailteann today in Skerries.

Ronan McLaughlin from Muff placed 16th over and was just less than a minute down on the overall winner, Luuc Bugter of Delta Cycling Rotterdam.

The three Donegal riders at the end of the Rás Tailteann in Skerries. From left, Mitchell McLaughlin, Ronan McLaughlin and Aaron McBride.

Convoy’s Aaoron McBride, who was guesting for Longford Cycling Club was 97th, while Mitchell McLaughlin from Drumkeen, a member of the local Four Masters Club, finished 98th when part of the Lucan team.

Speaking at the finish line, Mitchell said he was extremely happy with his performance.

“Completing the Rás is something I’ve always wanted to do and it was an unbelievable experience,” the 20-year-old said.

“After watching the Rás last year, I decided to make it my goal in 2018 and I put in a good winter’s training. As things turned out, it was a last minute decision to compete. It really opened my eyes to what the next level is all about.

“I was buzzing when I came over the finish line today and it was great to see people I know well waiting for me. Saturday was by far the toughest day in the saddle, as the hills were really testing. The heat was a factor all week, too.

“Overall, I’m thrilled to have finished and I’m looking forward to the rest of the season. The Foyle Two Day in August is my next competition and I hope to give a good account of myself.”

This afternoon saw Ronan McLaughlin complete is ninth Rás, while Mitchell and Aaroan were both first-timers. They join an elite bunch of cyclists who can now call themselves a “Man of the Rás”. This year’s event saw the riders complete 1,180 kms over eight stages throughout the lower half of the country.