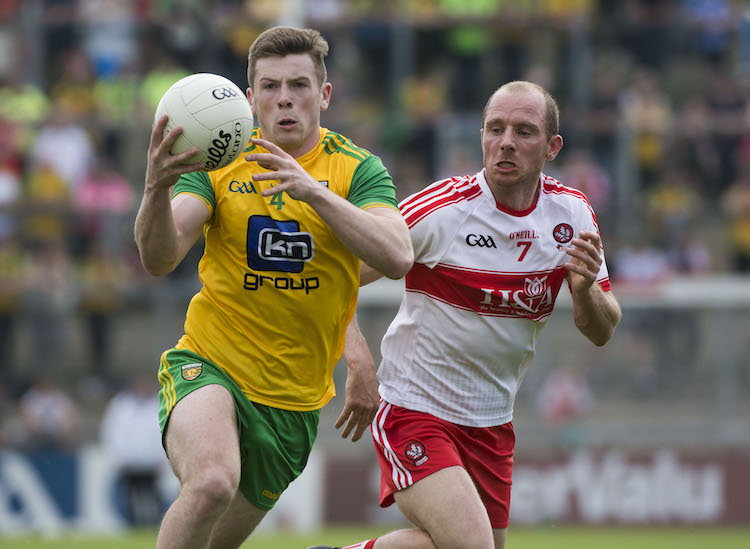 written by Chris McNulty May 29, 2018
FacebookTweetLinkedInPrint

Donegal had little trouble in navigating their way to an Ulster SFC semi-final as Declan Bonner’s team defeated Derry by six points.

Hugh McFadden and Cian Mulligan netted the goals in either half as Donegal moved into the last four thanks to a 2-16 to 0-16 win.

It was a Donegal side that didn’t need to hit the high notes and there were some real positives for Bonner to take ahead of a semi-final clash with Down in two weeks’ time.

Eyebrows were raised when Declan Bonner stated his belief last winter that Shaun Patton could become Donegal’s number 1 goalkeeper in 2018. Patton, after all, had played only a couple of games of senior Gaelic football ever and had been forging a soccer career in the League of Ireland.

Even with Cork City, the League of Ireland champions, knocking on his door, the Letterkenny man liked what he heard from Bonner as he mulled over his options.

In Derry, Patton showed just why Bonner rates him so highly.

His kick-outs were on point and played a big part in both the Donegal goals, while he kept a clean sheet too.

Patton is still learning the trade, but the St Eunan’s clubman could prove to be more than a very useful acquisition by Bonner.

Patrick McBrearty will be giving Bendan Rogers nightmares at this stage.

In the Ulster Club semi-final, Kilcar’s McBrearty pulled ten points from the Slaughtneil defender in Omaha.

Here, again, McBrearty showed he had Rogers’ number. In a scintillating display, McBrearty recaptured his League form to score eight points and Rogers was called ashore on 52 minutes.

“Patrick is a vital player for us,” Declan Bonner said afterwards.

“His kicking was excellent, some of them from distance. It’s great to see that.”

The Kilcar man clipped three-in-a-row midway through the first half and at the end of the half he added one that was even before, curling wonderfully over from close to the sideline.

3. Expansive Donegal remain too open at the back

In two Championship games, Donegal have now conceded 59 chances. Cavan scored 1-15 in Ballybofey and registered 13 wides. Against Derry, Donegal shipped 0-16 and the Oak Leaf, like Cavan, shot 13 wides. Derry also hit the post when Emmet Bradley was in for a goal chance.

“Most teams you play will get chances but a lot of what we done today wouldn’t be at the level that we want to be at and we have to improve – there’s no doubt about that,” Bonner reckoned after Sunday’s outing.

“We shipped 16 points and conceded nine frees, which is something we’ll have to work on. The guys are working hard and it’s about getting the balance and the blend right.”

Bonner has noted how his players are enjoying the new expansive system he has devised, but  some of the Championship’s bigger guns will punish the sort of openness Donegal have shown to date.

4. Donegal showing they have plenty in reserve

For the second Ulster Championship game in a row, Cian Mulligan came off the bench to score a goal – and what a finish it was by the Gaoth Dobhair man as he thundered beyond Ben McKinless, the Derry goalkeeper.

Odhrán Mac Niallais came off the bench too having missed the Cavan game while 2012 All-Ireland winner Mark McHugh was another kept in reserve.

On top of those who came on at the weekend, Donegal still had the likes of Darach O’Connor and Mark Anthony McGinley on the bench, with Martin McElhinney, Martin O’Reilly and Nathan Mullins not making the 26.

“You even have to look at what team you want to finish a game with, depending on different scenarios,” Declan Bonner said.

“We know we have players there ready to get in. You can see boys putting their hand up to be selected now – be it in the starting team, in the 21 or the 26.

“Everyone is pushing it on and the squad is never fixed. It changes all the time and players on form will get in.”

5. Under-20s catch the eye with real statement of intent

There was a little of the unknown about the Donegal Under-20s before Sunday’s preliminary round game against Cavan – the curtain-raiser to the senior clash of Donegal and Derry.

But there could be little doubt about the impressiveness of the Donegal Under-20s’ performance.

They ran Cavan ragged, the Breffni torn asunder by Niall O’Donnell, who posted a brilliant 1-12.

O’Donnell made a late decision to join the U20s having been in the senior panel previously, while Jason McGee made a similar call earlier in the year.

Gary McDaid’s team had 17 points to spare and their odds of silverware will have shortened considerably after a magnificent hour.