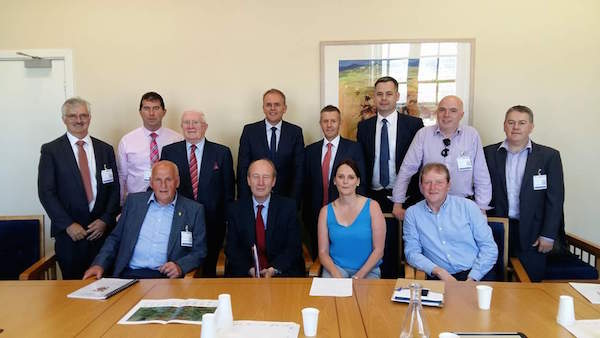 A delegation of councillors from the Donegal MD met with the Minister for Transport Shane Ross today in Dublin.

Speaking about the meeting Cllr. John Campbell said the goal was to impress upon the Minister the importance of the Pettigo road for Donegal and the Northwest as an access route.

“Today was an opportunity to re-establish funding for the route. Stretches of the road had been improved through funding coming from EU financing, however, this completely disappeared once Fine Gael came to power and the recession saw funding essentially dry up” explains Cllr. Campbell.

He added that in the meantime, the quality of the road has been disintegrating over time yet remains a singularly important route for Donegal traffic and trade.

“We felt it was vitally important that funding be re-established outside of existing budgetary proposals like T-TEN and Project Ireland.

Also speaking on the Pettigo route, Independent TD for Donegal Deputy Pringle stressed the importance of continued funding. “In my earlier years as a Councillor in Donegal we managed to prioritise Pettigo for funding under EU financing which allowed sections of the road to be upgraded over time.

“The Government made the decision to stop this avenue of funding as austerity kicked in during the recession. It had been a priority up until that point.

“Now as the economy improves, I think Donegal should get its fair share” says Deputy Pringle.

According to Cllr. John Campbell, while the Minister was encouraging, he did not commit to funding for Pettigo Road despite the case being made by the Donegal delegation.

“We will endeavour to make further representations on the issue and work together to make sure it is firmly put on the agenda going forward” concludes Campbell.