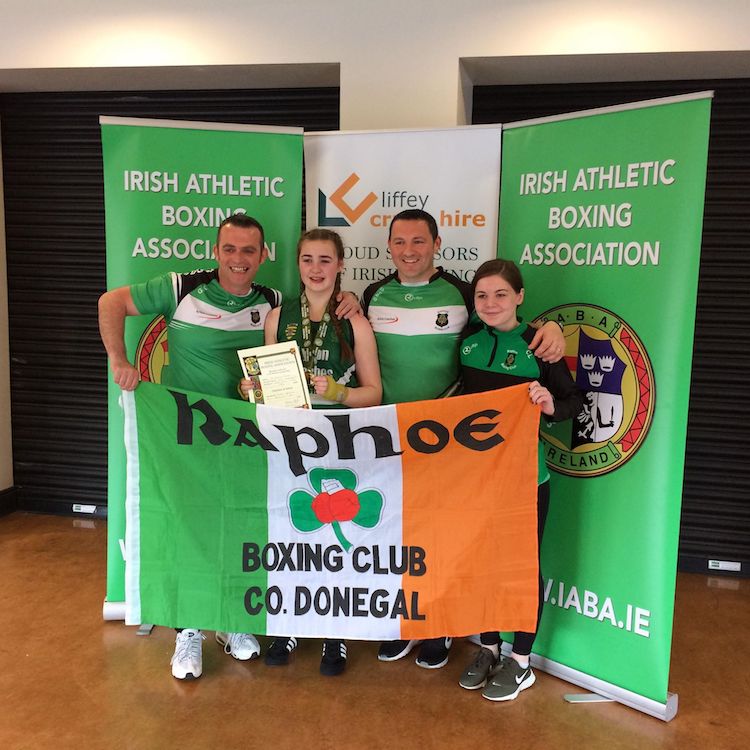 Leah Gallen will begin her Junior Certificate exams in St Columba’s College next week – after having the sporting month of her life.

The 15-year-old won the Irish Girl 5 66kgs final at the National Stadium in Dublin on Saturday afternoon. The Raphoe ABC boxer defeated Keisha Attwell from Ennis in impressive style.

Gallen described herself as ‘pure buzzing’ after Saturday’s win.

Gallen’s talents have been obvious for some time now, from her formative years with Finn Valley ABC before she made the move to Raphoe. Gallen had previously won an Irish title with Finn Valley.

Her hand was raised in victory after she impressed against the tricky Attwell, who had stopped Megan Hewitt in her semi-final last weekend.

“It was a really, really tough fight,” she said.

“It was one of the toughest I’ve ever had.

“I didn’t know what way it had gone. I thought at the end that it could have gone either way. I felt a wee bit inside me that I had done more. It was just unbelievable to hear my name called out.

“I didn’t have a lot of fights and had a girl pull out of the semi-final. I was so ready for it. I was pure buzzing. I wasn’t that nervous because I had experienced it before and knew what to expect.”

Gallen is trained by Gary McCullagh and Gerard Keaveney at the Raphoe club and her’s is a timetable and a schedule that would inspire many – at any level.

She said: “Gerard and Gary are great coaches and I couldn’t ask for better. I’m working so hard, but if it wasn’t for them I wouldn’t have won it.”

This month, Gallen was part of the Donegal Under-16 side who recently defeated Cavan 4-10 to 0-5 in the Ulster final. On July 4th, Donegal play Galway in an All-Ireland semi-final. Around the same time, the Irish Cadets take place in boxing and, with Gallen – who also lifted an Ulster boxing title recently – hoping to win a place for the European Championships later in the year, the focus will remain on both sports.

“I train away every night and I get up every morning to do stuff,” Gallen said.

“I combine them all, but it’s not too bad because the football and the boxing are on different nights. I’ve been training way and working hard for this for the past year.

“It is hard on the body. I’m steady going to physio and getting rubs out in the Villa Rose.”

Her grandfather is Tommy Gallen, the proprietor of the Villa Rose. A large crowd greeted her at Lifford Bridge on Saturday night and a victorious cavalcade made its way via Raphoe back to the Villa Rose.

Gallen said: “There was a great crowd for me back in Donegal. I didn’t think so many people would have come out. It was brilliant.”

She smiles that she’s ’not sure how great study is going’ as she gets set to sit her exams, but a disciplined timetable will ensure that she’s as ready for them as she was for Attwell on Saturday.