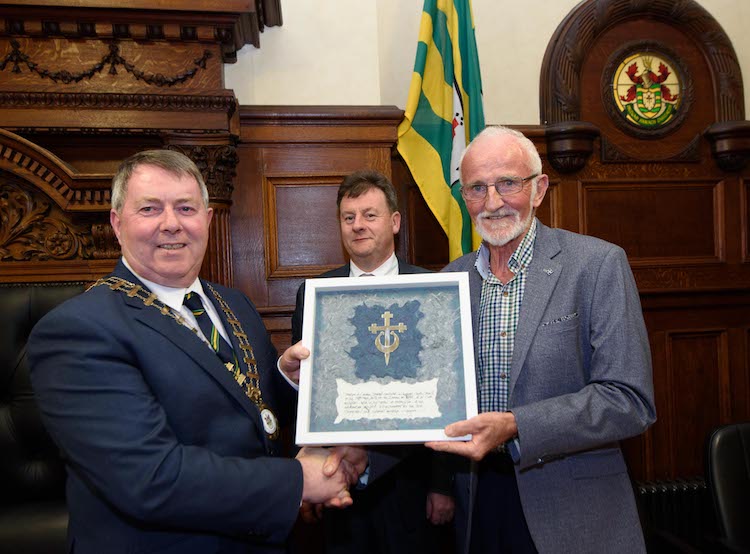 written by Chris McNulty May 29, 2018
There was a huge turnout of family, friends and supporters of Donegal’s two time Olympian athlete Danny McDaid at the County House in Lifford as the elected members of Donegal County Council bestowed the Freedom of the County on this great sporting hero at a special Civic Reception.
Danny has represented his country in the Olympics on two separate occasions – in Munich in 1972 and in Montreal in 1976.  In fact he was the first Irishman to cross the finish line at the 1972 games.
He is also a four time National Marathon Champion.  He took part in nine World Championships, first competing for Ireland in the International Cross Country Championships in Madrid in 1969.  He captained the Irish Senior Cross Country team from 1975 to 1981.
However, as Cathaoirleach Cllr. Gerry McMonagle stated “these achievements are, without doubt, impressive but what is even more impressive is Danny’s commitment to his sport, to his community, to his charity work and indeed to County Donegal”.
Danny is a long time volunteer for Diabetes Ireland and is known to be relentless in his fund raising activity for this very worthy cause.  Danny has also been very active in athletics in Donegal for many years and as a member of Letterkenny Athletic Club lobbied for the state of the art running track at the Aura Leisure Centre in Letterkenny which was aptly named in his honour.
Cllr. McMonagle continued “Danny is without doubt one of our greatest sporting heroes in Donegal.  He has represented his country and competed in the ‘greatest games on earth’ and brought great pride to the country, the county and most importantly to his friends and family.
“He has dedicated his life to helping others through his voluntary and charity work with Letterkenny Athletics Club, Diabetes Ireland, the North West 10k and many other charitable causes.
“His sense of civic pride is admirable and his commitment, his dedication and his endurance to achieving the best he can be is inspiring and it is for all these reasons that it is a great honour for me, on behalf of Donegal County Council to bestow the county’s highest honour on Danny McDaid”.
Chief Executive Seamus Neely said “Donegal is a sporting county and we have been successful in sport because of people like Danny McDaid and we are here this evening to celebrate this success”.
“Danny’s success is all the more remarkable when you consider the challenging conditions that he trained and competed in.  He did not have the supports that are available to athletes today.  In fact, Danny has dedicated his life to sharing his own experiences and his own learning both in terms of training as well as competing to other athletes so that their journey to success can benefit from his.
Regina Drumm President of Athletics Ireland also paid tribute to Danny and said that she had no doubt that this honour would be bestowed on Danny in recognition of his own achievements in athletics but also in recognition of his contribution to the sport.  She described Danny as a straight talker and said that there is no greater honour than being recognised by your own people in your own community and that it is a clear reflection of the esteem and affection that the people of Glenswilly, Letterkenny and Donegal have for Danny McDaid.
A representative from each political grouping also paid tribute to Danny McDaid and to his outstanding achievements and contributions to life in Donegal.
In his emotional response Danny gave details of his own journey which he described as a pilgrimage and as remarkable.  It is 53 years since Danny first got involved in athletics with Cranford AC and he said “little did I think in 1965 when I joined Cranford AC that I would be here this evening.  It has been a remarkable journey and I have met some wonderful friends along the way.”
He also paid tribute to his own parents and described them as hardworking people.  “I was number 7 out of 10 children and although we didn’t have much my parents worked very hard and we always had fresh eggs, fresh milk and bread on the table”.
He recounted his many accolades and awards and noted that in 1986 he was named as the Donegal Person of the Year.  He paid tribute to his wife and his four children and he thanked the people of Glenswilly, of Letterkenny and of Donegal for all their support over the years.
Danny is the ninth recipient of a badge and pin specially commissioned by the Council. The badge (and lapel pin) is reserved exclusively for those on whom the Freedom of the County is conferred.
The badge, crafted by Ms Geraldine Hannigan, Designer Goldsmith, Letterkenny, and mounted on a background designed by Mr Fionntan Gogarty, Artworks, is a silver replication of the County Badge granted to the Council County by the Chief Herald of Ireland as part of a Grant of Arms to the County. The badge comprises the O’Donnell Cross enfiled by an Iunula.  The Iunula on which it is based was discovered at Trentagh, Co. Donegal, and dates to the period 1500 -2,000 B.C.  It is on display in the National Museum.
Other recipients of the Freedom of County Donegal include Seamus Coleman, Anthony Molloy, Phil Coulter, Shay Given, Patsy McGonagle, Daniel O’Donnell, Packie Bonner and the 28th Infantry Battalion. 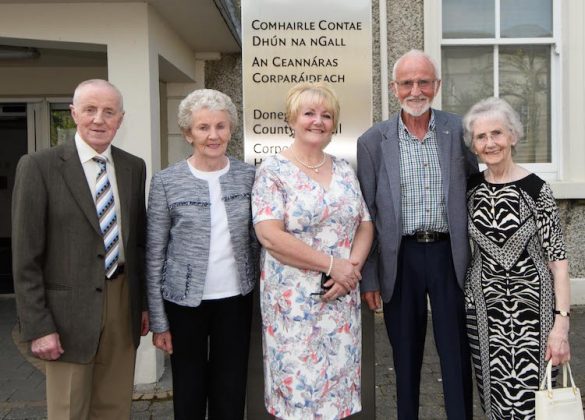 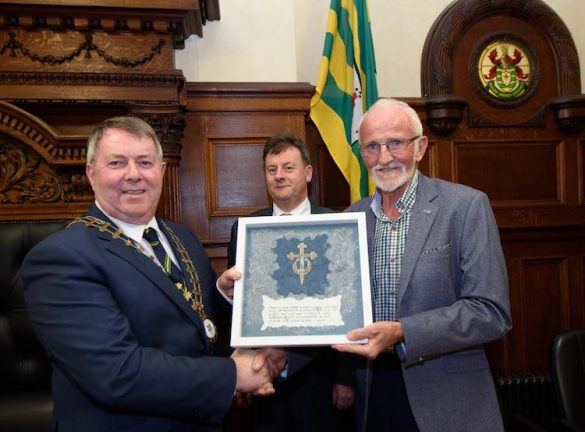 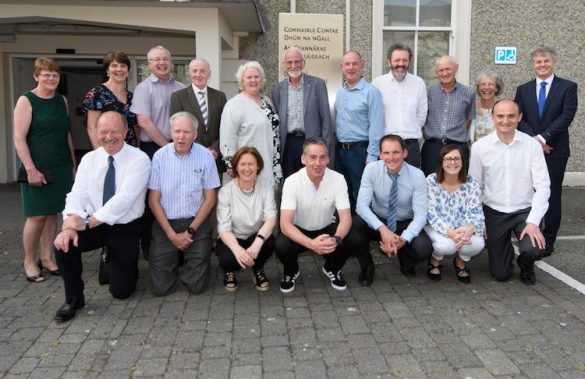 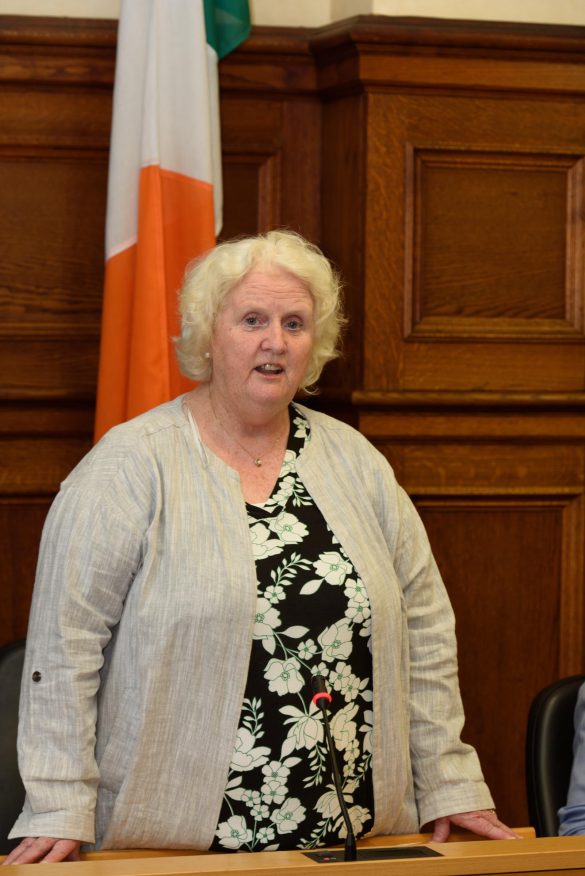 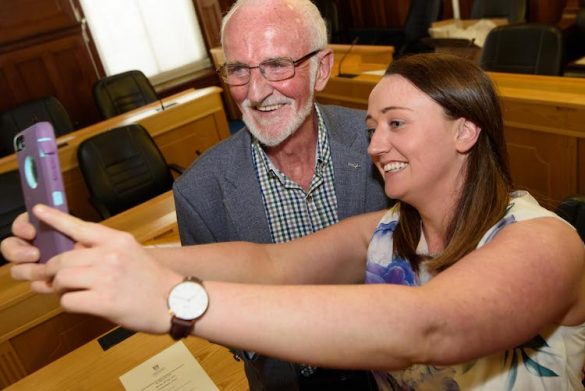 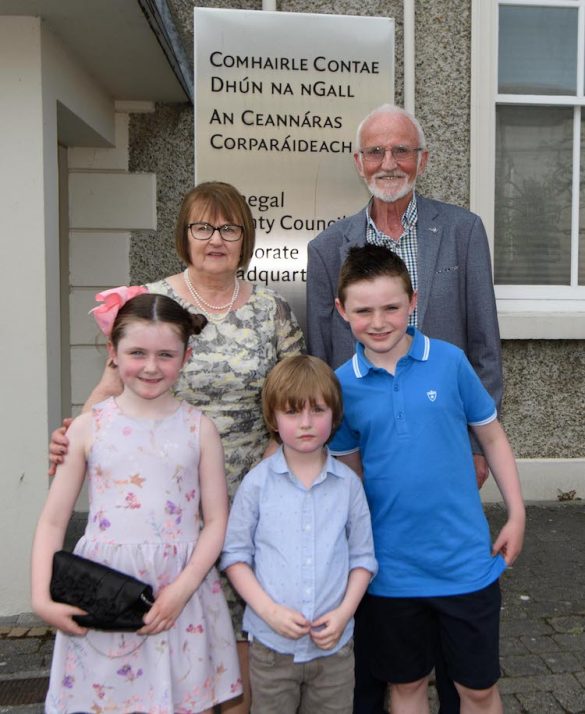 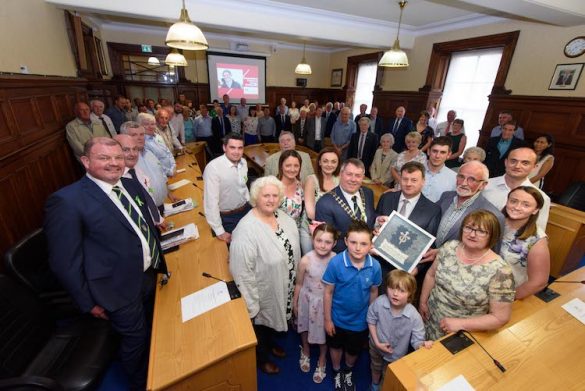 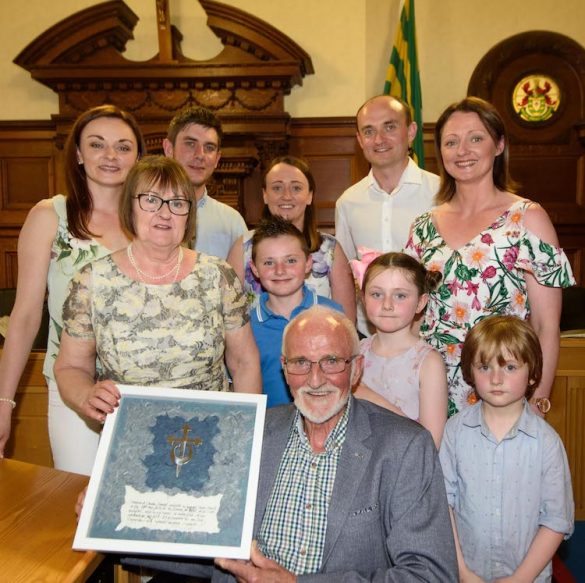