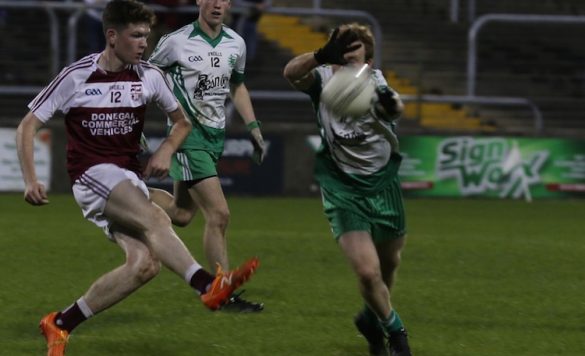 Enda McCormick returned to action on Sunday after a spell on the side lines with a foot injury.

The twenty year-old forward got his first minutes of action on Sunday after not being able to feature at all for Termon in the league this year. In fact it was only in the last week that he got a support brace removed from his foot showing an impressive return in terms of recovery.

McCormick is one of the most talented footballers in Donegal and has already shown his class in the biggest of stages. His stunning goal in Croke Park two years back against Galway has kept his name on the lips of many supporters across the county.

McCormick had spent time training with the senior panel over the past two years, but his commitments are fully focused with the U-20s this year. McCormick admitted that it was a great relief to get minutes under his belt.

“Yeah, glad to get back into it now. Cavan’s totally over so we’re just focusing on the tie on Sunday with Derry.

“There’s massive competition in the squad, not even just in the forward line but all over the pitch, just going to have to try and work myself back in now.”

The Termon man admitted that entering the pitch was a bit daunting due to the fact that he wasn’t long clear of injury. But that all went out of his mind the second his boot touched a blade of the Celtic Park grass.

“Yeah well you know I was a bit nervous at the start but it went all right, so I’ll just be pushing on now in training this week for the game on Sunday.”

The U-20s put in an incredibly respectable performance on route to beating Cavan last week. Defensively the side looked particularly strong, the middle sector of the pitch was firmly blocked and Cavan were being constantly forced into difficult shooting positions.

“I think just everything was put in place and all the players took on all the information that they were told from the management team.

“It all worked out to plan and we put up a great score so that’s going to send out a bit of a marker across the county now.

“Just moving forward, hopefully we can put together another performance like that.”

The forward line were equally as worthy as the defence on Sunday and they amassed a scoring total of 2-21. Peadar Mogan, Nathan Boyle and Odhran McFadden all offered brilliant support in attack.

But Niall O’Donnell who was a bit of a surprise inclusion in the squad hit 1-12 and was a constant menace throughout. McCormick acknowledged it was brilliant to get him back in the squad.

“He was a massive help, I think he scored 1-12 against Cavan so he’s going to be a massive bonus going forward, he’s a quality player and it’s great to have him on your side.”

Derry haven’t played a game so far in this championship campaign, but many have been raving about them after the performances their minors put in last year.

“This competition there is no league so you can’t get any information on your opposition really, but they’re the second best team in the country.

“They ran us short in an Ulster final in 2016 and they played in an All-Ireland final at minor level last year so no doubt we’re going in and we don’t know that much about them,” McCormick concluded.