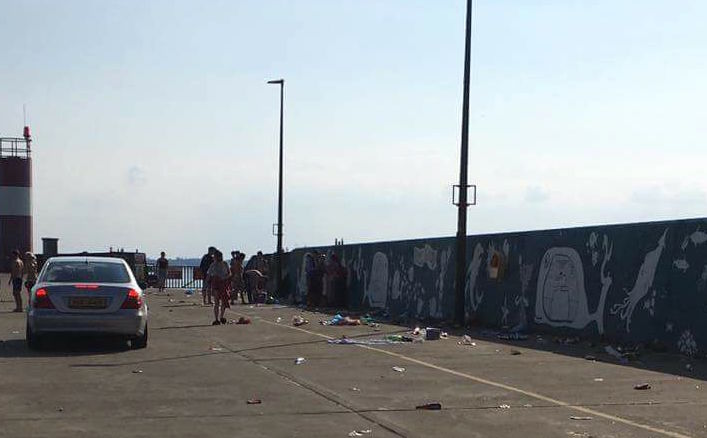 Vandals who left a trail of destruction and litter at Buncrana Pier have been slammed.

The group of revellers left the pier under a deluge of litter after an all-night party.

The pier was the scene of one of the saddest chapters in Donegal’s history following the tragedy in which five members of the one extended family drowned in 2016.

The group left everything from beer bottles to towels and all sorts of other rubbish behind them following the blow-out.

Donegal County Council was forced to bring in a clean-up team at 6am to the pier to clean up the mess.

Now local county councillor Rena Donaghy has called for a ban on people being allowed to congregate at the pier.

She said that everyone is welcome to visit the area but pleaded with them to take their rubbish home.

“It was just a disgrace what was left behind. It was everything from bottles to cans to towels.

“There is no shortage of litter bins in the area but these were not used.

“I would like to thank workers from Donegal County Council who were on site at 6am cleaning the area up,” she said.

Cllr Donaghey said she would not like any further tragedy to happen at the pier if youths continue to gather in the area.

“I don’t want to think of the consequences of what could happen if somebody with a couple of drinks on them were to fall off the pier.

“The pier is not a place for partying and I’m hoping this does not happen again,” she said.

He said “It’s an absolute disgrace that, while people are enjoying the sun, others would selfishly ruin it for everyone in this way.”

Councillor Donaghey added that it was nice to see the local Beach House Restaurant reopening at the pier since it was first closed last year.