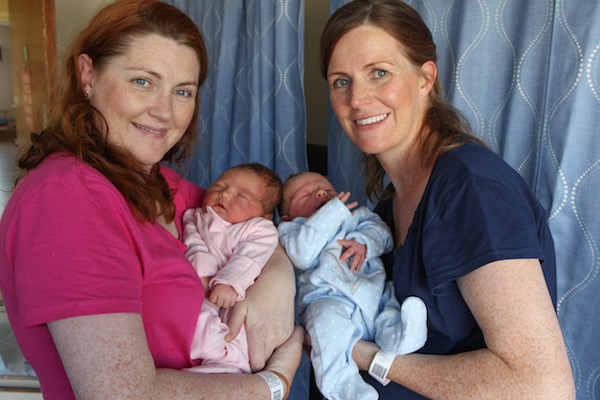 Sisters Marie Thornton and Sarah Doherty didn’t have to go far to visit eachother when they gave birth to their bounding bundles of joy.

In fact, the Co Donegal women simply had to look across the maternity ward at eachother at Letterkenny University Hospital.

By a remarkable coincidence, both women gave birth at the same time, making it a real family affair.

The babies, who have yet to be named, both arrived within hours of eachother with baby girl Doherty arriving at 8am and baby boy Thornton arriving at 5.20pm.

Both sisters are originally from Rathmullan but Marie now lives in Letterkenny while Sarah lives in St Johnston.

Marie said it was comforting to be in the same maternity ward.

“I suppose it is unusual but it was lovely to have your sister there with you in the hospital.

“It’ll be good fun and having birthdays together and the like,” said Marie.

And in another coincidence, it was revealed that Sarah’s other daughter Katie was also born on the 29th of May – in 2012.