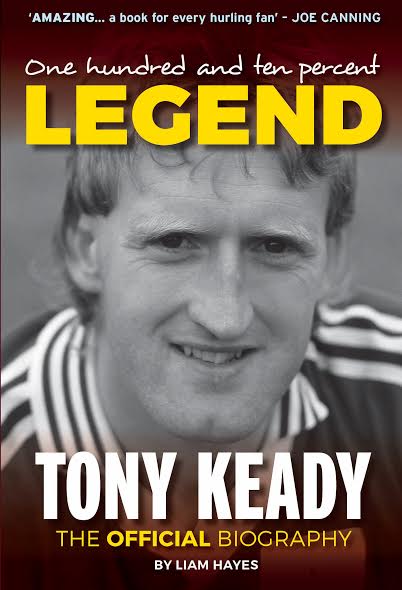 THE daughter of late great GAA legend Tony Keady has issued a personal plea to supporters of the game in Donegal to back her Dad to No1 in the book charts.

Now Shannon Keady has penned a personal letter to every club in Donegal asking fans to get a book about his life – One Hundred and Ten Per Cent Legend – to the top of the book charts.

My name is Shannon Keady, and I am writing to ask you a big favour.
My Dad is Tony Keady, and he passed away suddenly at the end of last summer. But myself and my Mam, and my three brothers, have published a book telling his story. It is written by Liam Hayes, the former Meath footballer and journalist.
The book is called ‘One Hundred and Ten Per Cent Legend’ because my Dad would always tell us to give 110% any time myself and my three brothers were playing camogie or hurling, or if we were doing our exams in school.
My Dad’s book was published last month and it is now in bookshops all over the country. We are so proud of it. It means the world to us. My Mam and I were on the Late Late Show a few weeks ago talking about it and she said that the book kept us all going through our first winter without my Dad. That is true. It did.
Now as a family, we want to give 110% for my Dad’s book. He would have wanted it to be the No.1 book in the country, and we want to make it the No.1 book in the country.
At the moment it is No.1 in Galway, and in the Top 20 in Ireland. Can you help me and my brothers make it No.1?
I am asking everyone in the GAA for their help.
Father’s Day is on June 17, and we think it would be a great present for every father in the GAA.
It would be the best thing ever if ‘One Hundred and Ten Per Cent Legend’ was No.1 before my Dad’s first anniversary in August.
Thank you for reading this, and I hope you can help.

Daughter of late great GAA legend asks Donegal fans to back book to No1 was last modified: May 31st, 2018 by John2
Tags:
bookdonegalGAATony Keady