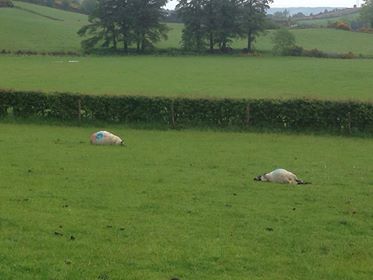 A number of sheep were killed and others had a lucky escape when a severe lightning strike hit outside the village of Drumkeen.

A ewe and a lamb were killed immediately when struck by a bolt of lightning at Legland just before 2pm.

A local woman revealed how dozens of other sheep had a lucky escape during torrential downpours and severe thunder and lightning.

HUndreds of households were left without power in various parts of Donegal following the thunderstorm.

ESB crews were scrambled to various areas in a bid to get power restored to these areas.

A spokesman for the ESB said “1,200 homes, farms and businesses without power around North Donegal this evening, mainly due to lightning damage. Crews are mobilised and PowerCheck will have real-time estimated restoration times. Customers can also call 1850 372999 for updates and to report outages. We apologise for any inconvenience caused.”

Businesses were also badly affected after internet lines were knocked out.

Many shops including Penneys in Letterkenny could not use their credit or debit card machines for a number of hours leaving customers being forced to look for cash to pay for goods.

Many roads were also left flooded and some manholes in Letterkenny were forced open because of overrunning water.