As the North West Women’s Super League breaks for the exam period, just three points separate five teams at the top of the pile.

Greencastle and Illies Celtic lead the way after 8-0 wins over Clonmany and Moville on Thursday night last.

Club in the North West Women’s Super League are reminded to submit results and goalscorers immediately after the game and to follow up with match reports.

There was nothing to separate Bonagee United and Fanad United in a pulsating scoreless draw at Dry Arch Park on Thursday night.

The two sides came into this one locked on points and there wasn’t even the width of a Rizzla between them on a baking evening at The Arch.

Either side could have sneaked through when the respective doors were left ajar, but the goalkeepers couldn’t be breached.

In a first-half of few openings, Bonagee might have taken the lead, but Chantelle Grant – excellent throughout for the hosts – saw a dipping effort cannon off the top of the Fanad crossbar.

At the other end, Julie Trearty was denied by a fine save by Clare Friel, the Bonagee ‘keeper.

Towards the end of the first half, Bonagee were hit with a big blow with the enforced withdrawal of defensive warrior Maria Carr, who had been to the fore, before a collision resulted in her departure from the action. 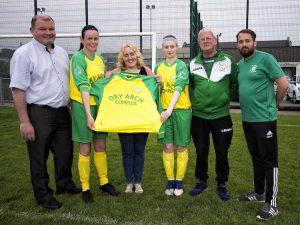 Fanad’s Orla McGonigle worked Friel in the second half and the Bonagee ‘keeper saved another tester by visiting captain Amanda Callaghan.

Grant drove Bonagee on, but fizzled one chance into the side netting while another punt across goal just couldn’t get a finish.

Fanad had big appeals for a penalty when Trearty went down under a challenge from Leona Russell. The attendance immediately glance at referee Con McLaughlin, but he waved away the shout.

Bonagee sent on live-wire Niamh McGlinchey in the second half, but it was to end in stalemate as Alice Diver headed over after connecting with a Grant corner in the closing minutes.

Lagan Ladies travelled to Carndonagh on Thursday evening and came away with a great win.

Shannon Cunningham was on top of her game scoring six.

Nadine Crawford scored a headed from a Danielle McDevitt corner. Crawford also scored a free kick from outside the box after Shannon Cunningham was fouled.

Heather Dougherty scored twice for Lagan, the first a tap in after Shannon Cunningham squared the ball.

Her second came after Chantelle Kelly send her racing through.

Bronagh Gallagher also got on the score sheet when she latched onto a through ball by Catherine Grier.