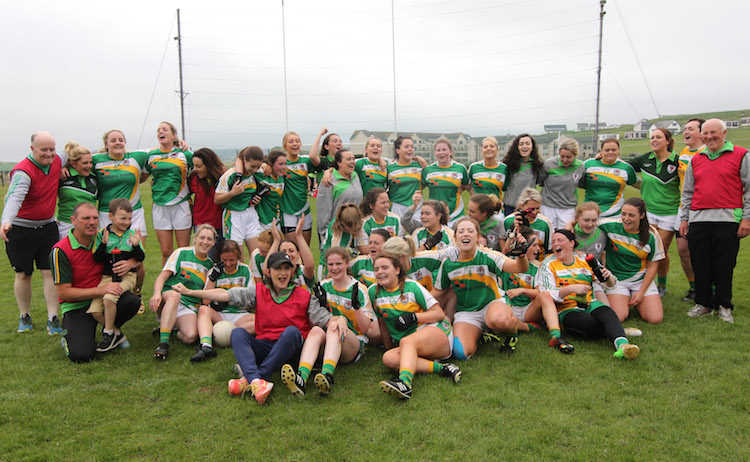 Rachel Coyle was the toast of Downings as a stunning scoring display shot the Rosguill women to glory in the All-Ireland Junior final at Comortas Peile na Gaeltachta.

Coyle landed 13 points as Downings scored a memorable win on home soil, but they needed extra time to get their hands on the prize.

Downings trailed by four points when Julie Trearty had her arm pulled as she was readying the trigger and referee Pat Barrett awarded a penalty in the 43rd minute. Trearty dispatched the penalty right into the top corner of the Cill Chomáin net.

Rachel Coyle scored ten of her points in normal time and the home side might well have sneaked it only for Tamara Ni Conchubhair to arch over a late equaliser.

Cill Chomáin kicked it away with a series of missed chances in normal time, but Downings took up the running at the outset of the extra time with Coyle adding two more and Shannon McGroddy curling over after working the chance with Coyle.

In the second period of extra time, Coyle added another free and was denied a goal when Sorcha Ní Mhurchú tuned away her close-range attempt. But Coyle was the hero of the hour in a display that will live long in the memory.

Downings roared out from the blocks and Coyle hit three points in the opening three minutes to give them an early edge.

Coyle’s third, an excellent free, steadied any early nerves that might have been whistling for the natives.

Downings might have had a goal in those early moments but, after a Coyle free was spilled by Sorcha Ní Mhurchú, Lauren McBride’s shot was deflected out for a ’45.

Caitriona Ní Dhochartaigh and Dina Ní Bairéad kicked the opening Cill Chomáin scores and the Connacht side took the lead when Anita Ní Dhochartaigh fed Tamara Ni Conchubhair, who beat Danielle Doherty in the Downings goal with a tidy finish.

Denise Doherty had swept over an excellent point for Downings, but when Máire Ní Rudaigh netted a second Cill Chomáin goal on 29 minutes, the hosts faced a stiff climb.

Anita Ní Dhochartaigh’s point put four in it, but a Coyle free, her fifth point of the game, had Downings trailing by three, 2-4 to 0-7, at half-time.

Downings racked up a massive score yesterday in their semi-final as they overcame fellow Donegal side 9-11 to 2-12 to book a place in the first of today’s deciders.

Led by the excellent Tamara Ni Conchubhair, Cill Chomáin moved four clear 12 minutes into the second half with Leah Ní Ghraith also on the mark.

But Downings, with Coyle keeping the scoreboard moving, including one majestic effort from out the right, stayed in touch and when Trearty brilliantly sent a penalty to the net, the home side were roused.

They did have their blushes spared when Nicole Ní hEiri shot wide soon after, but Downings regained the lead.

Trearty popped over either side of a brace from Coyle, whose final point of normal time was a wonderful effort that put her side in front, only for Tamara Ni Conchubhair to force extra time.

Both Tamara Ni Conchubhair and Coyle had chances to win it in added time, but there was to be no separating them.

Ultimately, though, Coyle proved the difference as Downings came out on top.