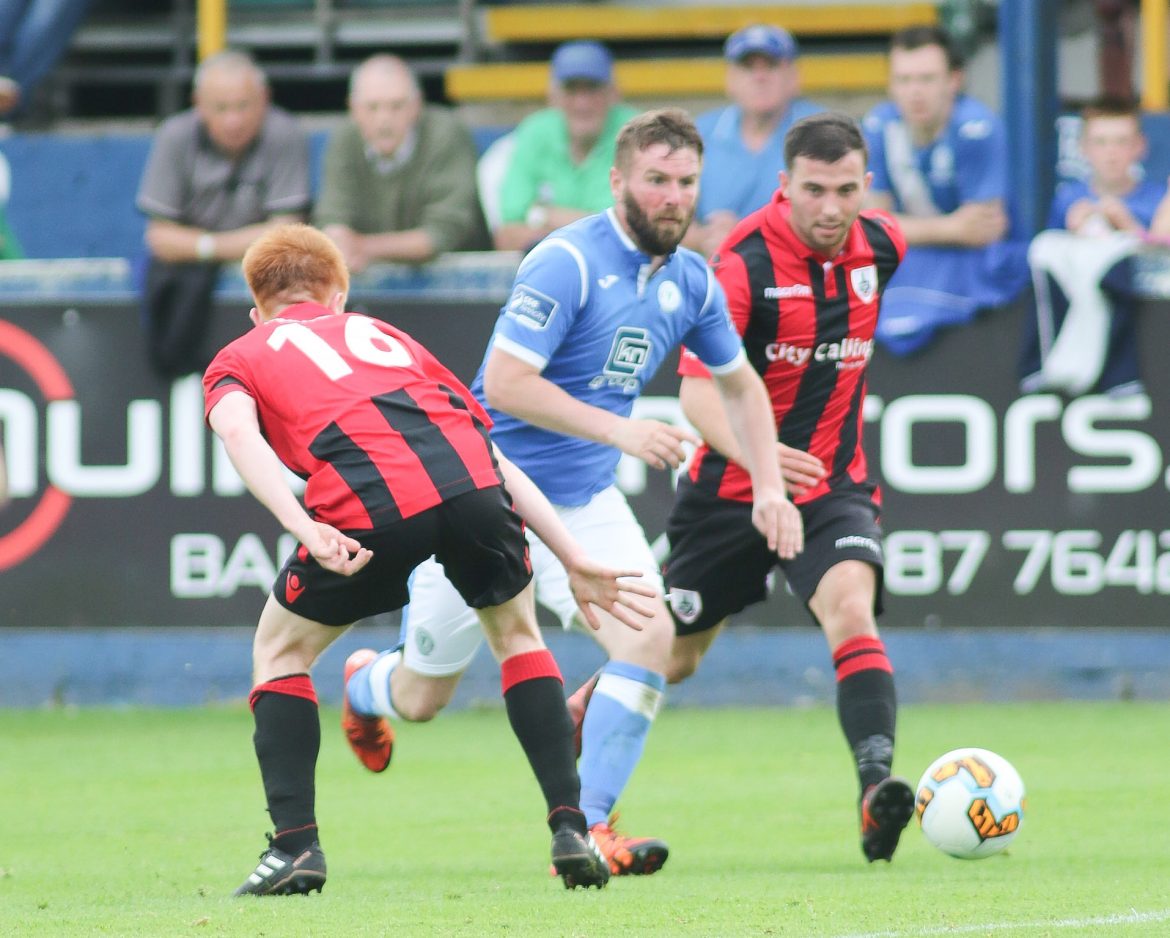 Despite making a comeback from two goals down early in the second half, Finn Harps suffered defeat at the hands of Longford in an exciting clash at Finn Park.

Harps had a poor opening half and found themselves two goals going in at the break. Ollie Horgan was fuming with the referee over certain decisions at the half-time whistle.

His team talk seemed to motivate Harps in the second half and they were back level within nine minutes. But the home side were unable to hold on to the draw in what was a captivating forty-five minutes.

Dylan McGlade was excellent throughout and he proved to be an important factor in securing Longford’s victory.

The away side took just five minutes to open the lead at Finn Park, a Karl Chambers cross from the right was diverted towards Aodh Dervin and the young midfielder did well to volley past Ciaran Gallagher.

Longford played most of the football in the opening fifteen minutes with Finn Harps struggling to get a foothold on the game. It took twenty minutes before they managed to get a first shot on target.

After holding the ball smartly for a period, Ciaran Coll found Ciaran O’Connor with a fizzed pass. He turned straight on to his right foot and shot from the edge of the box but Michael Kelly pulled off a comfortable save.

Longford struggled to remain in control of the game despite having a very bright opening period. Harps were beginning to see a lot more possession in attacking positions but weren’t really able to force an opportunity.

Jesse Devers pulled another save out of Kelly after he volleyed Ciaran O’Connor’s cut-back towards goal but his effort was tame. Harps were pushing a lot of men forward and this was creating gaps at the back.

Longford doubled their league on the half hour mark, a perfectly threaded pass from Dean Byrne found Dylan McGlade and he dispatched the chance past Ciaran Gallagher with total calmness.

A beautiful curling effort off the right boot of Aodh Dervin from outside the box almost made it three but his effort went just over the bar.

McGlade was causing Tommy McBride problems all day, some tricky footwork found him a yard of space but his shot went over the Harps crossbar. The home side were struggling in attack and weren’t able to keep hold of the ball for long enough to create chances.

Longford should have got another goal five minutes before half time. Sam Verdon had options either side as he attacked the Harps area, he elected to go by himself but his effort hit the post and Harps fired clear.

Harps came out much stronger in the second half and they got their reward when Jesse Devers was fouled just inside the box. Paddy McCourt sent Michael Kelly the wrong way and rolled the penalty into the opposite corner on the 52nd minute.

Devers was at the thick of things moments later again when he found space in the middle of the pitch and played Mikey Pace through with a brilliant pass. The young forward raced on to the ball and finished with ease past Michael Kelly.

The third goal of a highly entertaining second half went to Longford, Sam Verdon nodded into the net after Ciaran Gallagher got caught under a corner from the away team. Just twelve minutes had been played of the second half when Longford reclaimed their lead.

Jesse Devers almost equalised when his header met Paddy McCourt’s free-kick but it didn’t truly test Michael Kelly in the Longford goal. Devers nearly got another chance soon after but the midfielder just couldn’t get on the end of a McCourt pass.

Harps were ramping up the pressure for the last fifteen minutes and had another chance when Paddy McCourt headed over.

Longford were dangerous on the counter for the whole game, in particular the exceptional Dylan McGlade was menacing. With just over ten minutes to go McGlade scored Longford’s fourth with a classy run and composed finish past Ciaran Gallagher.

Tommy McBride then saw red at the end of the ninety minutes after making a rash challenge.