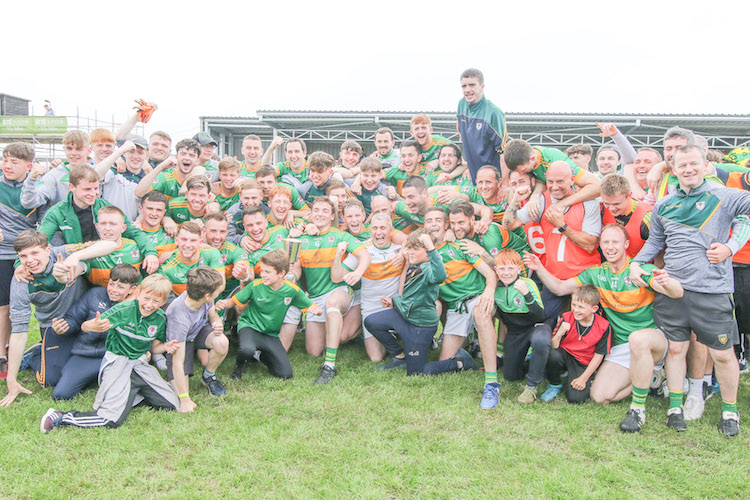 Allen Pasoma’s goal in the final minute swung the gripping final in the Downings men’s favour, after it seemed as if Seamus ‘Nanny’ Friel’s goal would see the silverware head over the Harry Blaney Bridge.

But on the home soil and roared on by a huge support, Downings struck gold. Gary ‘Ban’ McClafferty and Lorcan Connor combined with the latter feeding inside for Pasoma, who turned and fired past Brendan Friel, the Gaeil Fhánada net minder.

The goal sparked wild celebrations around a venue that has been transformed in recent times ahead of these Championships, but they were nothing compared to the scenes that greeted Jimmy White’s final whistle.

Eoghan Carr and Michael Sweeney had late points for Gaeil Fhánada, but Keelan McGroddy clipped over in between times to keep the hosts in front.

McGroddy, who was lively throughout and who scored three points, was sent off late in added time after collecting a second yellow card for a foul on Fergus Friel. 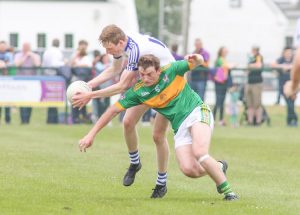 Gaeil Fhánada were trailing by two points, 0-7 to 0-5, when Seamus ‘Nanny’ Friel and Mark McAteer were called from the bench in the 37th minute.

Downings, too, had trump cards to play and, five minutes later, after Kevin Doherty’s point put two between them, Lorcan Connor was sent into the trenches, while Gary ‘Ban’ McClafferty came in for the final quarter as the home side looked to stay ahead.

A rousing score by Keelan McGroddy, after fine approach work by Eric Roberts, had Downings three in front with 13 minutes left to play.

Seamus ‘Coshia’ Friel, seconds after being introduced, landed a free from the 45-metre line and Gaeil Fhánada led for the first time on 56 minutes.

Brian McVeigh’s shot careered off a Downings defender and into the path of Seamus ‘Nanny’ Friel, who finished well to stun Downings.

But Gary McClafferty’s free levelled it up and Pasoma was soon wheeling away from a moment that will live long in the memory by the Downings firesides.

Downings raced into a three-point lead and the boisterous home crowd were already daring to dream. 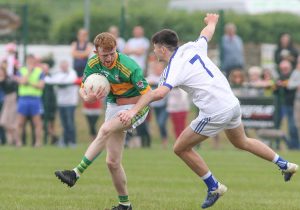 James Lee McBride strode forward to open the scoring before Keelan McGroddy and Eric Roberts (free) landed points to throw the gauntlet down to their foes.

Eoghan Carr’s free got Gaeil Fhánada up and running, but Shane Boyce and Roberts had Downings 0-5 to 0-1 ahead.

That, though, was also thanks largely to a fine save by John McGroddy, who beat away a stinging Michael Sweeney shot in the 14th minute.

Downings failed to score at all in the second quarter, but Gaeil Fhánada hit points from Carr (2) and Oisin Shiels swung over in added time.

Just the minimum was between them at the break, when Downings led 0-5 to 0-4 and they saw James Lee McBride and Danny McBride confirm that the first half had been no fluke.

Their points made it a three-point game again and Downings – who lost out to the same opposition in last month’s county Comortas Peile na Gaeltachta final – were able to get back in front to hold on for one of their greatest hours.