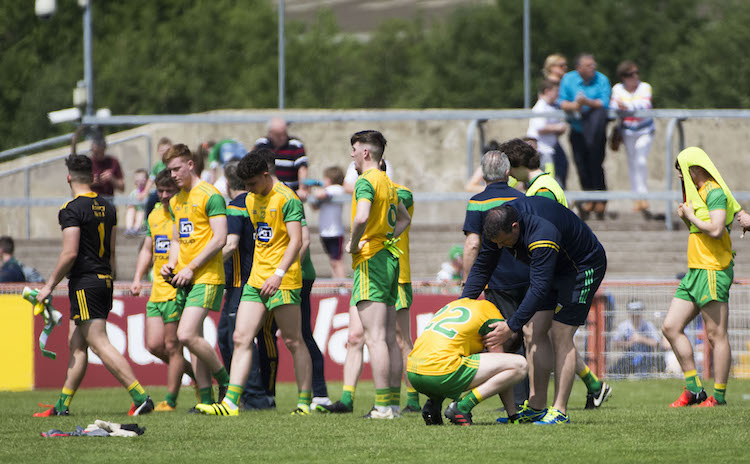 “This isn’t something we were ever thinking about” – Gary McDaid

Not even someone as ultra-prepared as Gary McDaid was ready for the moment.

McDaid has long since forged a reputation for being an intensely-detailed manager whose eye for the most minute features of his opponents have aided successes as club and schools level.

The Glenswilly man’s Donegal Under-20s began their Championship campaign in perfect fashion last weekend, handing Cavan their coats and frog-marching the Breffni to Celtic Park’s exits after a 17-point loss.

But deep in the bowels of Healy Park, just as Rory Gallagher – who he assisted with the Donegal seniors in 2015 – was preparing to go to war for Fermanagh against Monaghan, McDaid was picking up the pieces.

Donegal’s U20s were beaten 0-16 to 2-9 by Derry as the express train ground to a shuddering halt. Just like that: Months of labour and graft up in smoke.

As McDaid collected his belongings, he looked lost for words or answers.

Half-an-hour earlier, McDaid stood in a dressing room and it hit him. He certainly hadn’t prepared for the moment.

“It’s been a long year and this isn’t something we were ever thinking about,” McDaid said.

“It wasn’t a speech that I had ready for today, to tell the boys ‘best of luck’ in their careers. It is so, so hard.

“There was huge potential in that group. Last week, they really did fulfil that potential. Today, they didn’t and it was a difficult dressing room.”

There is little that can be said when a team just simply doesn’t turn up.

Donegal had first-half goals from Peadar Mogan and Paddy Dolan and looked set to turn on the afterburners. But it was Derry – powered by Callum Brown, Oisin McWilliams and Conor Doherty – who scored six-in-a-row to move in front. 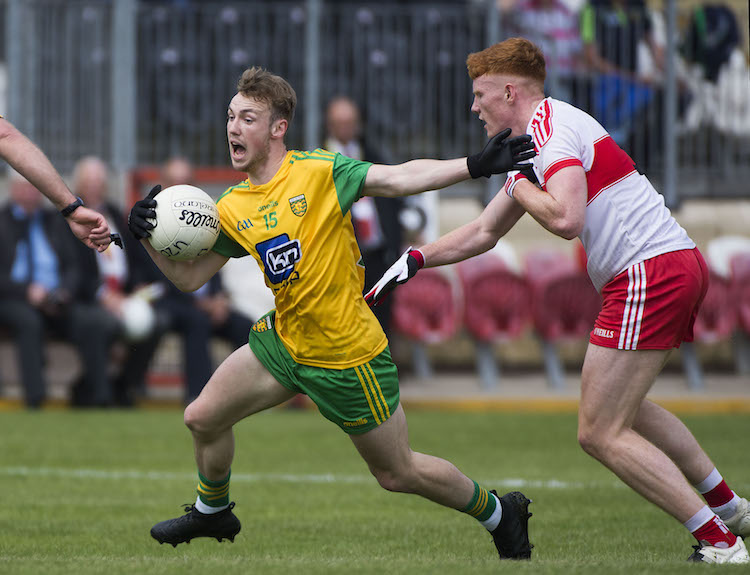 Donegal were in it until the end, but when Aaron Deeney went to group and didn’t get a free with just a point between them, it was clear that Donegal’s number was up.

‘A difficult pill to swallow’ was how McDaid described it.

McDaid said: “It’s not easy. It’s hard coming in from that after the amount of work that has been put in. It was second to none.

“They have been unbelievable but it just didn’t work out for them. I can’t fault them. They are all leaving the camp better players. It has been second to none.

“We expected a flurry of scores after the goals, but they never came. We had a poor first quarter too. We were poor in the third quarter when Derry got three-on-the-trot. The team that gets ahead in the last quarter has the momentum.”

Niall O’Donnell scored 1-12 in Donegal’s big win over Cavan, but the St Eunan’s ace couldn’t get into his groove here, while Jason McGee was in a huge tussle at centrefield and even Enda McCormick’s introduction as a half-time sub was unable to ignite the flames.

Considerable effort, time and commitment had gone in from all corners for this but in the end it came down to the finest off all margins. Ultimately, too, they have no-one upon which to deflect the blame and that, perhaps, is the most difficult thing to take for McDaid and his backroom men.

McDaid said: “Everything we worked on last week came off, but that was so frustrating today and we only lost by a point. We didn’t get anywhere near the level that we’re capable of. They had a huge amount of work done and they didn’t get near top gear.

“We always talk as a group about fulfilling potential and not underselling themselves on Championshop day.”